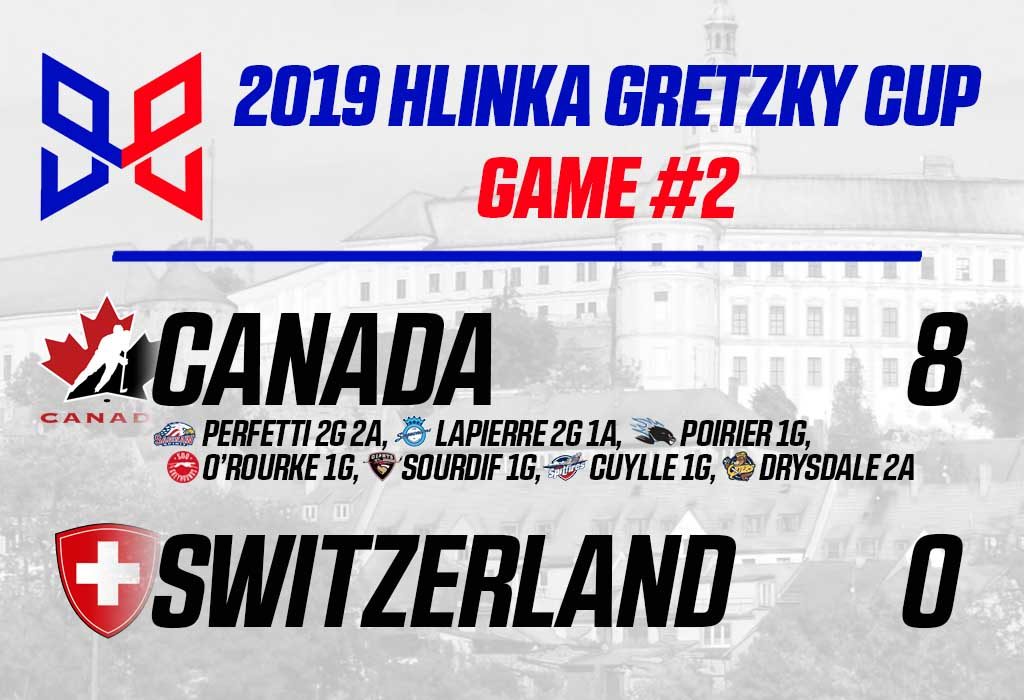 There was no let up on Day 2 of the 2019 Hlinka Gretzky Cup as Canada came away with an 8-0 victory over Switzerland.

Following a two-goal effort in the tournament opener versus Finland, Saginaw Spirit forward and 2019 NHL Draft hopeful Cole Perfetti was back at it Tuesday, pocketing another two tallies while also picking up a pair of helpers to bring his early total in the 2019 Hlinka Gretzky Cup to six points across two games. A native of Whitby, Ont., Perfetti led all OHL rookies last season with 74 points in 63 appearances.

In all, Perfetti was one of three Canadian skaters to wrap up Tuesday’s contest with multi-point efforts alongside Lapierre (2-1–3) and Erie Otters defenceman and team captain Jamie Drysdale, who came away with two assists.

Forwards Justin Sourdif (Vancouver Giants) and Will Cuylle (Windsor Spitfires) picked up the other goals for Canada.

“I thought we played well and kept developing as a team as the game went on,” said Team Canada head coach Michael Dyck of the Vancouver Giants. “It was a good step in continuing to build towards our ultimate goal, which is a gold medal, but I thought the team had a strong performance tonight. We did a lot of the little things right and stuck to our game plan, and kept an even keel throughout the game.”

In the blue paint, netminder Dylan Garand (Kamloops Blazers) made his tournament debut, but did not see a busy night as the Swiss squad tested him with just eight shots. Meanwhile, Canada directed 48 shots toward Switzerland goaltender Noah Patenaude.

Canada returns to the ice Wednesday versus Czech Republic when it will try for its 12th straight win at the Hlinka tournament.