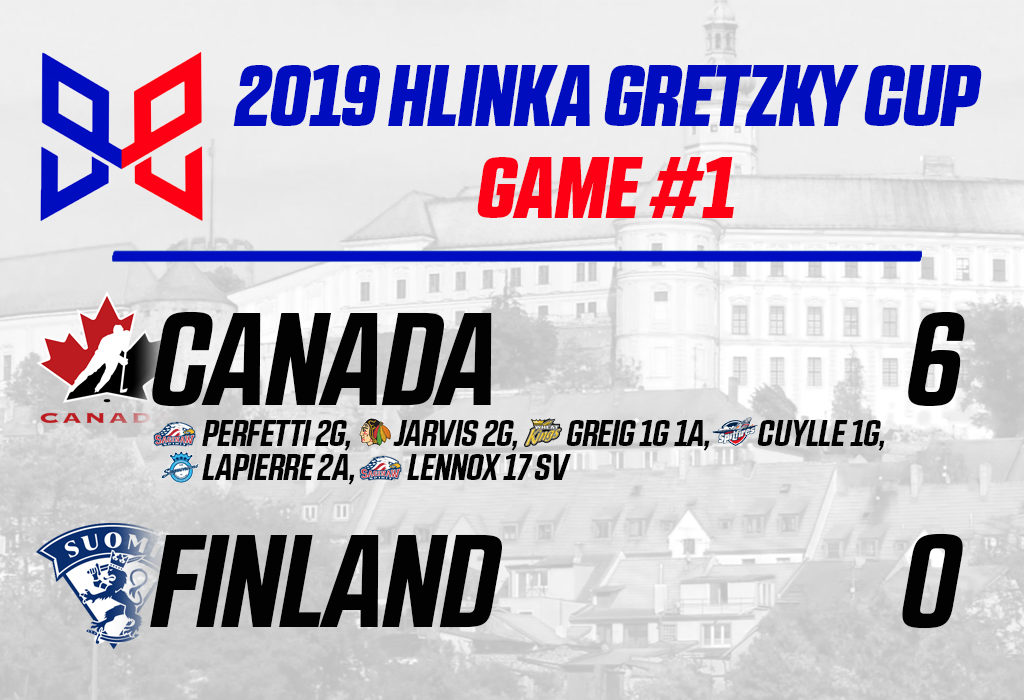 Team Canada opened the 2019 Hlinka Gretzky Cup on a winning note, defeating Team Finland by a 6-0 score on Monday.

Leading the way for the Canadian squad were forwards Cole Perfetti (Saginaw Spirit) and Seth Jarvis (Portland Winterhawks), with each scoring two goals a piece, while Will Cuylle (Windsor Spitfires) and Ridly Greig (Brandon Wheat Kings) also chipped in on the offense.

Greig also picked up an assist on Cuylle’s tally, while Hendrix Lapierre (Chicoutimi Sagueneens), the first overall selection from the 2018 QMJHL Entry Draft, wrapped up the contest with a pair of helpers.

“It was good to get the first win,” Perfetti said in a statement. “It was a big win for us because we know how good Finland is, so to get that first one under our belt was great. Getting that early lead was key for us and it shows what kind of team we are. Moving forward, we have a lot of confidence in our group and we will keep building momentum the rest of the tournament.”

Between the pipes, Spirit netminder Tristan Lennox was rock solid for the Red and White as he turned aside 17 shots for the shutout. In all, Canada fired 34 shots toward Finnish goaltender Joel Blomqvist.

The victory pushed Canada’s win streak at the Hlinka Gretzky Cup to 10 games, including last year’s perfect 5-0 showing on home soil in Edmonton. The tournament returned to Europe this year, with hosting duties split between Czech Republic and Slovakia.

Since 1991, Canada has captured 25 medals at the Hlinka Gretzky Cup (previously known as the Ivan Hlinka Memorial Tournament), including 22 gold, two silver, and one bronze. Canada won the gold medal in both 2017 and 2018 and will look to make it three consecutive first place finishes this year.