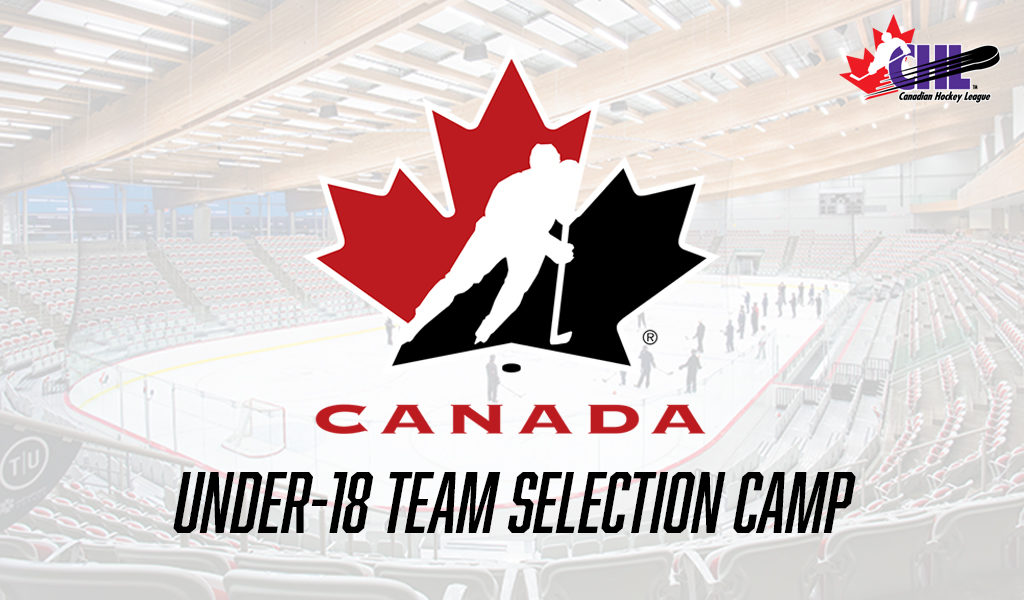 Canada and gold medals are synonymous when it comes to international hockey.

Especially with the recently rebranded Hlinka Gretzky Cup, a tournament in which the Great White North has finished first place 10 times in the past 11 years.

This summer, Team Canada will look to make it three consecutive gold medal wins, led by Vancouver Giants bench boss Michael Dyck, who when camp opens Friday will be tasked with selecting the final roster before the puck drops on Aug. 5 for the tournament opener. It’s a relatively short window to finalize selections, covering three practices and as many intrasquad games, meaning the invitees, including 41 from across the Canadian Hockey League, will need to act quick to make a lasting impression.

Among the group, some players enter the camp with a possible added advantage in having previously been involved in Hockey Canada’s Program of Excellence with the 2018 World Under-17 Hockey Challenge, offering them a unique understanding of Team Canada’s desired playing style, the team identity it strives to achieve, and the expectations that come with wearing the Maple Leaf jersey.

“We have an identity that we have formulated, not only based on what we identify as being winning components to a gold medal team – it’s based on past teams and we want to stick to that identity,” Dyck told the Canadian Hockey League. “The only way that we are going to be able to play to that identity is if we have 22 players who can emulate that, so we build a foundation with that. A lot of that foundation comes with habits and those are the kinds of things that we are going to be looking for.”

In many ways, making the final cut for the Hlinka Gretzky Cup squad is a stepping stone between Hockey Canada’s top programs, bridging players from the U17 to the ever-popular IIHF World Junior Hockey Championship. As such, familiarity with the program breeds a knowledge of the style of players required to fill out the tournament-bound lineup.

“We’re looking at not only selecting the best players, but we want to have a well-rounded team. At the end of the day, you’re going to see what players fit what role, and the next determination will be if they accept that role.”

For some camp invitees, their involvement with the U18 squad will be the first time suiting up in the Team Canada uniform, a meaningful moment that has truly been a dream come true for countless past players, while it’s also an opportunity for Dyck, a native of Lethbridge, Alta., to make his debut behind the bench as a head coach on the national stage after most recently serving as an assistant with the Team Canada U16 squad at the 2016 Winter Youth Olympics.

“A big part of being Canadian is watching our national teams play,” Dyck said. “Any time you get the opportunity to represent your country and be a part of a national program, it’s very special. When you grow up in Canada, everybody wants to wear that jersey, so it certainly is special, and as special as it is, there is a huge responsibility in putting that on as far as standards and how hard and how smart you play. We understand that and we want to represent our country well.”

There are high expectations that come when skating onto the ice with Team Canada, something Dyck and his staff are excited to embrace, in addition to the pressure that comes along with it.

“We’re going to set the bar high for ourselves. We have very, very high expectations as a staff, and I think the players do as well,” Dyck detailed. “The top 44 kids in this country, they are all very motivated and very competitive.

“As far as pressure goes, I think what we’re going to do is take the pressure off ourselves and put it on everybody else and be a team that plays on its toes and that is hard to play against. The focus is going to be on playing the right way and taking care of the how-to, and I think if we do that then the final result will take care of itself. Coming into this camp, we all want to win a gold medal for Canada. That’s our goal. Our focus is how we’re going to get that done.”

“We have some background information on these players, not only from their seasons in the CHL and abroad. You utilize past history and their performance at the camp,” Dyck added. “But the one constant is Brad McEwen, who has seen all of these kids. He has a very good feel for what’s coming in and will be able to tell us a lot about where these players sit in the lineup and what they can offer.

“At the end of the day, 44 players are coming in with a clean slate. It’s funny what happens at these camps, where there are players who seem to come in as unknowns and find a way of making it on to our roster, and there are some other players who come in with a lot of expectation and at times don’t (make the roster), so that experience is just what you make of it.”