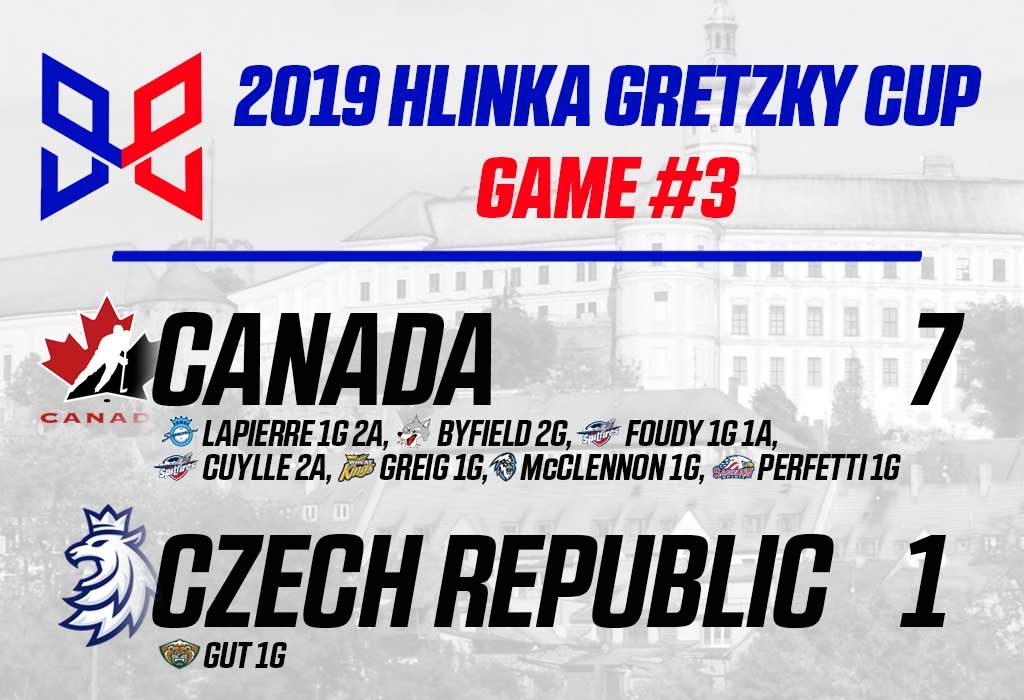 Canada closed out the preliminaries of the 2019 Hlinka Gretzky Cup with a perfect 3-0 showing following Wednesday’s 7-1 defeat versus Czech Republic.

Leading the way for the Red and White was Chicoutimi Sagueneens forward Hendrix Lapierre, the first-overall selection from the 2018 QMJHL Entry Draft, who notched one goal and two assists to bring his tournament total to a team-leading eight points, counting three goals and five assists. Also racking up the offense for Team Canada is Saginaw Spirit forward Cole Perfetti, who found the back of the net again Wednesday to bump his totals to five goals and two assists in the trio of showings.

Other multi-point efforts from the latest victory included forwards Quinton Byfield (Sudbury Wolves) with two goals, Jean-Luc Foudy (Windsor Spitfires) with one goal and one assist, and his Spitfires teammate in Will Cuylle with a pair of helpers. All three players are eligible for the 2020 NHL Draft.

Also scoring for Canada was Connor McClennon (Winnipeg ICE), the No. 2 pick from the 2017 WHL Bantam Draft, as well as Brandon Wheat Kings forward Ridly Greig, who was chosen five selections later.

Between the pipes, Canada got another solid effort from 16-year-old netminder Tristan Lennox (Saginaw Spirit), who turned aside 20 shots, and has now stopped 36 of 37 total shots through two appearances, good for a .973 save percentage. Canada directed 42 shots on Czech Republic goaltender Jan Bednar.

“Playing against the Czechs at home was a lot of fun and there was a lot of energy in the building, but we did a good job battling through it,” Team Canada head coach Michael Dyck of the Vancouver Giants said in a statement. “We will use tomorrow as a springboard into Friday, but we are really excited about the opportunity to play in the semi-finals.”

Forward Michal Gut (Everett Silvertips), selected with the 57th pick in the 2019 CHL Import Draft, scored the lone goal for the Czech Republic.

Canada now advances to Friday’s semi-final versus Sweden, while Finland will face Russia. The gold and bronze medal contests are then set for Saturday.