Byfield breaks in with the Kings 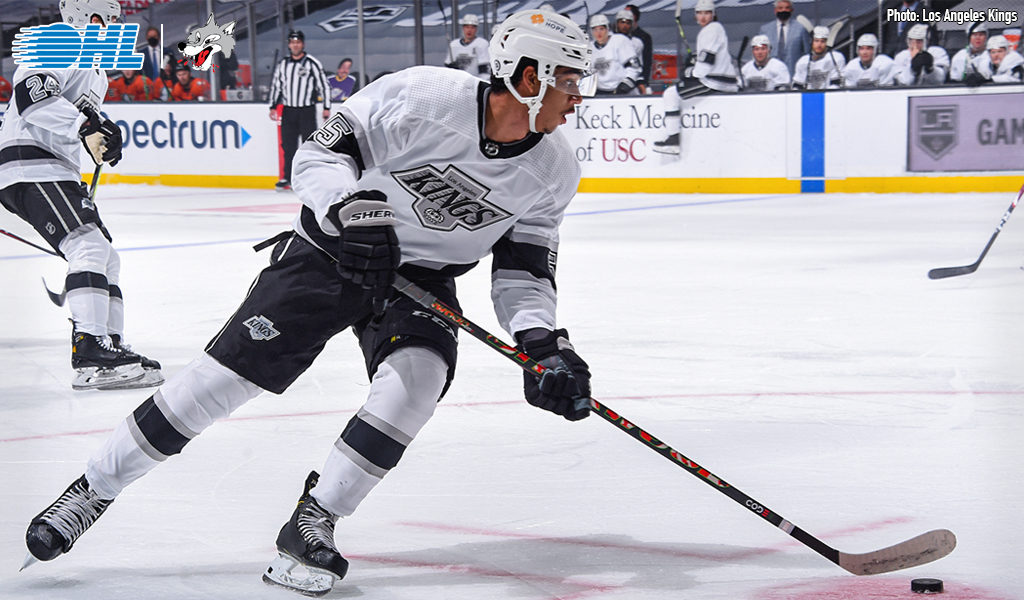 Right from his first OHL game on September 21, 2018 in Guelph, the signs were pretty clear that the Sudbury Wolves had a special player down the middle.

An effortless skater with a 6-foot-4 frame, Quinton Byfield is right where many thought he would be as an 18-year-old – taking faceoffs in the National Hockey League.

Byfield made his NHL debut with the Los Angeles Kings on Wednesday, firing off four shots and going 67 percent in the faceoff circle over nearly 18 minutes of ice as the Kings fell to the rival Anaheim Ducks 3-2.

Sporting the same number 55 he wore in Sudbury as OHL Rookie of the Year, Byfield made a late appearance in Wednesday’s contest as the extra attacker with the Kings down a goal, a tip of the cap from head coach Todd McLellan to wrap-up a memorable debut.

“It’s definitely a very exciting day,” said Byfield post-game. “I wish I could’ve shared it with my family, but I know they’re super proud of me.

“The pace is a lot faster, the guys are a lot heavier and more skilled,” he added of his first experience. “It was a lot of fun having some fans in the building and you could hear them and it definitely gives you a bit of confidence out there.”

The highest-drafted Black player in NHL history, Byfield was the second overall pick of the 2020 NHL Draft following an 82-point (32-50–82) sophomore season in Sudbury. He played a big part in guiding the club to its first Central Division title since 2001.

The Wolves, for their part, were thrilled to take in Wednesday’s game.

“We are really happy for Q,” said Wolves vice-president and general manager Rob Papineau. “He played a great game and gave all Kings fans a preview of what they can expect from him. When I connected with him he was so grateful and appreciative of last night. He is a humble and terrific young man who also really appreciates what the OHL, the Sudbury Wolves and the city of Sudbury have all done to help him reach his goal.”

The Newmarket, Ont. native got his feet under him at the professional level with the AHL’s Ontario Reign this season, recording 20 points (8-12–20) over 30 contests. He was also part of Canada’s National Junior Team, capturing silver in Edmonton this past January.

The highest-drafted Wolves player since Mike Foligno (3rd overall) in 1979, Byfield follows Arizona Coyotes defenceman Jakob Chychrun (Sarnia, 2014) as the latest Jack Ferguson Award recipient to make his NHL debut in the first game of what’s sure to be a lengthy NHL career.

Byfield lined up opposite Erie Otters product Jamie Drysdale of the Anaheim Ducks on Wednesday, becoming the second OHL talent from the 2020 NHL Draft to make his debut on the big stage this season.

“It’s definitely a very exciting day. I wish I could’ve shared it with my family, but I know they’re super proud of me.”