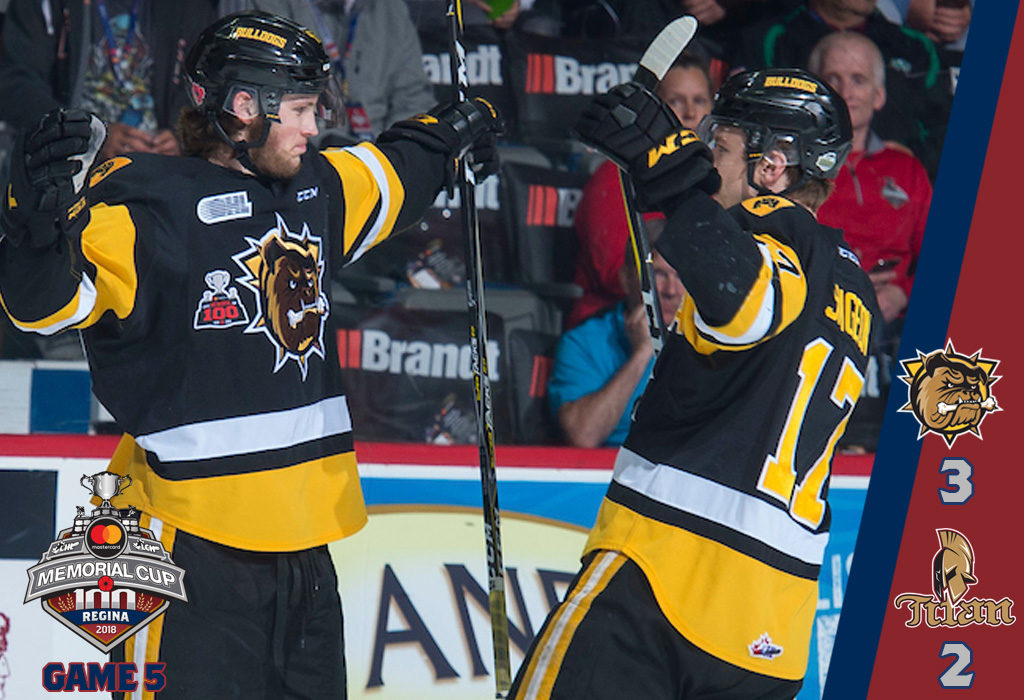 The Hamilton Bulldogs have secured themselves at least a semi-final berth, handing the Acadie-Bathurst Titan their first loss as Robert Thomas and Ben Gleason each had a goal and an assist in a hard-fought 3-2 win.

A win by a two-goal margin would’ve secured Hamilton a trip directly into Sunday’s Championship Final but the Bulldogs weren’t able to connect on a four-minute power play in the third and settled for a tenth straight one-goal win. They’ll now await the outcome of Wednesday’s all-WHL showdown between the champion Swift Current Broncos (0-2) and host Regina Pats (1-1) to determine their fate.

“You’ve gotta give them some credit, they buckled down,” said Thomas, referring to Acadie-Bathurst’s penalty killing effort to keep the margin within a goal. “I think we got a little bit loose on that power play and we weren’t able to find the net.”

The @BulldogsOHL hand the @ABTitan their first loss, grinding out a 3-2 victory to finish their #MCMemorialCup round robin with a 2-1 record. #MMC100

A Swift Current win on Wednesday would push the Bulldogs into the Championship Final. If Regina comes out on top, Acadie-Bathurst will gain entry.

Hamilton scored twice in the last six minutes of the opening period as Benjamin Gleason took a Brandon Saigeon feed to beat Evan Fitzpatrick with a power play one-timer at 14:33.

Dallas Stars prospect Nicholas Caamano increased the lead to two with 2:33 remaining, taking a cross-crease feed from MacKenzie Entwistle to beat Fitzpatrick under the crossbar.

Hamilton outshot Bathurst 16-14 in an eventful, free-flowing first period before the Titan found a way to get on the board late in the second.

Top NHL Draft prospect Noah Dobson joined the rush, connecting with Mastercard Memorial Cup scoring leader Jeffrey Truchon-Viel coming down the middle at 14:11 as he broke the Acadie-Bathurst offensive silence with his third of the tournament.

The Hamilton power play got back to work in the opening two minutes of the third, reinstating the two-goal lead as Robert Thomas found time and space to walk in off the top of the circle to beat a screened Fitzpatrick with a wrist shot over the shoulder at 1:04.

Acadie-Bathurst responded two minutes later as Truchon-Viel kept racking up the points, finding linemate Samuel Asselin busting through the middle for a one-timer past Fulcher at 3:44.

The Bulldogs were unable to convert on a four-minute power play and couldn’t solve Fitzpatrick the rest of the way, leaving their fate in the hands of the Swift Current Broncos on Wednesday.

“We’ll have to see what happens tomorrow night,” said Hamilton goaltender Kaden Fulcher who made 33 saves in the win. “Getting a couple days off is going to be massive for the boys to regroup and re-energize and in that sense it was a big win for us.”

Acadie-Bathurst outshot Hamilton 35-34 while the Bulldogs managed to go 2-for-6 on the power play.

Truchon-Viel leads the tournament with nine points (3-6–9) through three contests while Dobson trails close behind with seven (2-5–7).