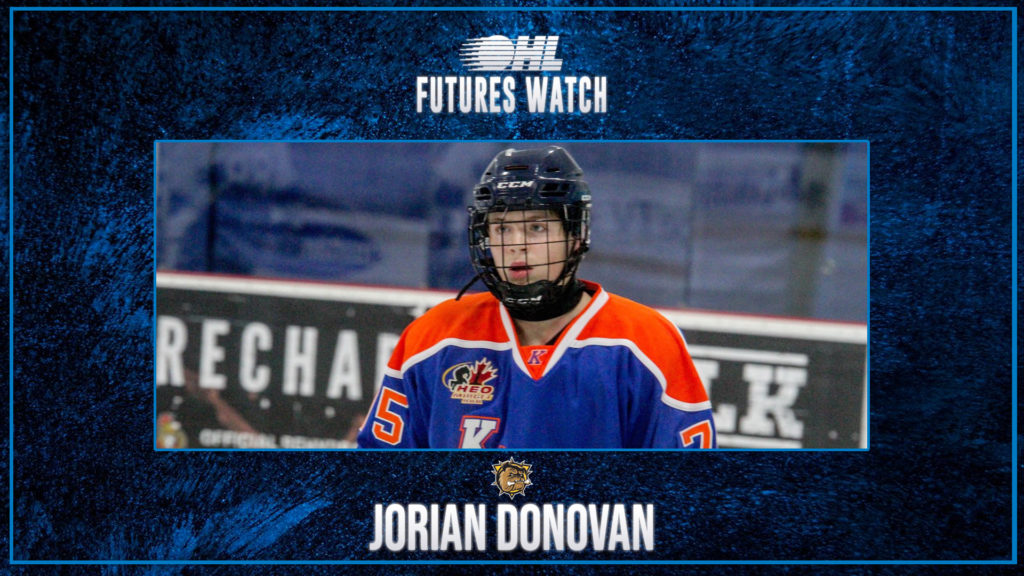 Jorian Donovan is determined to be the go-to guy for the Hamilton Bulldogs.

Drafted sixth overall at the 2020 OHL Priority Selection, the Kanata Lasers graduate and HEO’s 2019-20 Prospect of the Year has been touted for his ability to push the pace offensively and read plays defensively.

Admittedly, he isn’t one to boast about his skills too much, but he points to his smooth skating and competitive edge as two of his standout attributes.

“I was obviously born into a competitive family, and growing up being competitive you always want to strive for the best and chase whoever is ahead of you,” said the 16-year-old skater from his home in Richmond, Ont.

Both are attributes he credits to his father, Shean. As a graduate of the Ottawa 67’s, a long-time NHL forward, and most recently, head coach of the Lasers, Shean’s easily been the biggest influence on Donovan’s career since day one.

“One thing he told me is that you just have to hate losing more than you like winning,” said Donovan of his father. “You obviously get your genes from someone and I definitely got my skating from him. I thank him for that. I’m blessed to have good feet.”

Having played under the leadership of Brian Kilrea from 1991-95, Shean has fond memories of his time in the OHL.

“I got to learn from the best. I met great teammates, I had great billets and great trainers. It was a great experience,” he recalled. “We didn’t win the Memorial Cup or anything, the farthest we went was the Eastern Conference Finals but there are lots of friends I still talk to from the team. It’s such a formative time in your life that those friends, you’ll be friends with the rest of your life. I loved junior hockey.”

Jorian Donovan is still trying to find the words to describe the moment he was drafted sixth overall by @BulldogsOHL. The smooth-skating defenceman joined @sarahjeanmaher to discuss his hockey upbringing, pre-game routines and competitive edge ? pic.twitter.com/yi8druHIaj

Shean’s 15-year professional career ultimately landed him back in Ottawa where he spent his final three NHL years. He now works with the Senators as a player development coach.

Donovan was quite young during his dad’s conclusive NHL seasons so memories of his father suiting up at the NHL are understandably foggy, but he’s come to realize how formative his hockey upbringing has been in his own career; especially now that he’s been able to spend a lot of time around the Senators organization.

“I was very young and when you’re that young, you don’t really understand your dad’s an NHL player. It just seems normal to you. But when you really get older you find out special it is,” he said. “I’ve seen the rink, seen the room, seen the guys. It’s awesome, I’m glad to have him there.”

Shean acknowledges how important it’s been for Donovan and his younger brother Rylan to get a behind-the-scenes, close-up look at the development side of the game.

“They’re both lucky they get to be around the room. Just even getting to watch players like Thomas Chabot, to have seen him with Saint John when he was drafted, and to have seen his progression,” Shean said. “Then they end up seeing that these guys are just normal young kids trying to reach their goals, and then they get to see the work they put in to do it, so that’s a great thing.”

Ahead of his rookie debut with the Bulldogs, Donovan’s been working on getting bigger, stronger and improving in all areas. He’s been taking part in regular team Zoom calls, has developed a close friendship with teammate Liam Van Loon and looks forward to the opportunity to learn from fellow defenceman Nathan Staios when he finally gets to Hamilton.

“I love how Nate plays. He’s a good skater,” he said of Staios. “He’s a defenceman like me. I want to take what he knows and apply it to my game.”

He’s been skating with the CCHL’s Carleton Place Canadians, has been keeping busy with school and, in between, has recently gotten into chess – another outlet for his standout competitiveness.

While he awaits his opportunity to showcase his swift-skating and two-way game in the OHL, the reality of getting closer to living out his childhood dream is starting to settle in.

“I’m slowly starting to realize how special it is. At first, it hits you hard and you’re in shock but it comes to you pretty quick and it’s an amazing feeling,” said Donovan.

As his son gears up to embark on the next step in his hockey career away from home, Shean shared the biggest pieces of advice he hopes will stick:

“You’re lucky as a rookie because it’s a learning year so I told him not to get too hard on himself,” he explained. “You have to work hard and be the hardest worker. Listen to the coaches and understand that your ice time is coming from them. If you’re an offensive defenceman, you better be able to defend because that’s probably the guy they want to put out.”

And while Shean definitely sees a younger version of himself in Donovan – he was, after all, also lauded for his great skating ability back in the day – he doesn’t hesitate to point out their differences as well.

“I think he’s smarter than me as a player…but I wouldn’t tell him that,” he laughed.