Hockey Canada Under-17 Under-18 World Juniors 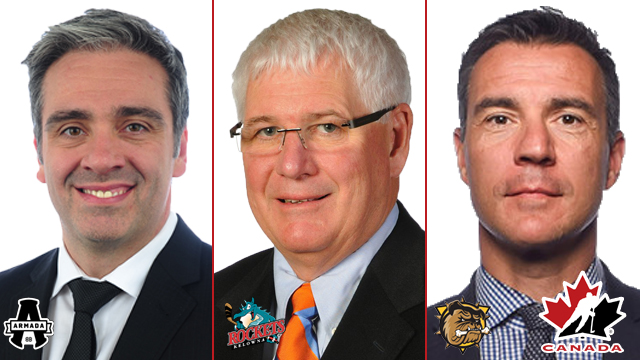 CALGARY, Alta. – Hockey Canada continues to prepare for the upcoming season with the announcement of its Program of Excellence management group for the 2017-18 season.

In March, it was announced  Joël Bouchard (Blainville-Boisbriand Armada) would continue as the lead for Canada’s National Junior Team next season.

The management group will work in conjunction with Scott Salmond, vice-president of hockey operations and national teams with Hockey Canada, director of player personnel Ryan Jankowski, and Shawn Bullock, senior manager of hockey operations and men’s national teams, who oversee operations within the Program of Excellence. The day-to-day operations include assisting in the selection of coaches and players, the support of coaching staff, as well as providing ongoing input during camps and events throughout the year.

“All three men have proven leadership qualities and experience within their respective leagues, as well as on the international stage,” said Salmond. “Their skill, knowledge and dedication to excellence will lead us through the year as we look to continue Canada’s tradition of excellence on the ice, and further develop skilled, committed players through our program.”

Staios was named president of the OHL’s Hamilton Bulldogs in 2015 after three years with the National Hockey League’s Toronto Maple Leafs. With the Maple Leafs, Staios served in various capacities, including manager of player development, player development advisor, and assistant coach. Staios played 1,001 regular-season games over 18 NHL seasons with the Atlanta Thrashers, Boston Bruins, Calgary Flames, Edmonton Oilers, New York Islanders, and Vancouver Canucks before retiring in 2012. Staios served as director of player personnel with Team Canada at the 2014 IIHF World Championship. He also donned the Canadian jersey as a player, winning gold at the 2003 and 2004 worlds, and came home with silver from the 2008 IIHF World Championship.

Hamilton has been a part of the Hockey Canada Program of Excellence since 2013. He was part of Canada’s National Junior Team management group that won IIHF World Junior Championship gold in 2015 in Toronto, and with the management group at the 2014 World Juniors in Malmö, Sweden. Hamilton is the owner, president and general manager of the WHL’s Kelowna Rockets, and since moving the team from Tacoma to Kelowna, he has won the WHL Championship four times (2003, 2005, 2009, 2015) in addition to winning the Memorial Cup when Kelowna hosted in 2004. Hamilton is serving his second stint as chairman of the Western Hockey League’s board of directors since 2008. He also served from 1998-2004.

Bouchard has been a member of the POE management group since 2013. He has been president and general manager of the QMJHL’s Blainville-Boisbriand Armada for the past six seasons, and took over as head coach in August 2014 after three seasons as an assistant coach. The Montreal native played 15 professional seasons, including parts of 11 seasons in the National Hockey League with eight teams. As a player, Bouchard made three appearances with Team Canada, winning gold each time.