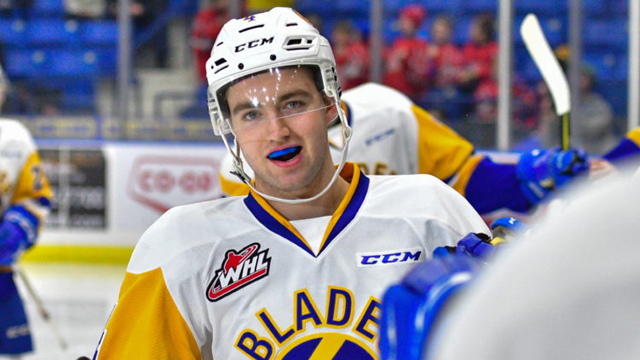 Toronto, ON – The Canadian Hockey League today announced that Saskatoon Blades defenceman Dawson Davidson is the CHL Player of the Week for the regular season week ending October 7 with eight points in four games including one goal and seven assists along with a plus-minus rating of plus-6.

Davidson leads the CHL in scoring among defencemen following a week where a trio of multi-point performances helped spark three straight wins for the Blades lifting them into second place in the WHL’s Eastern Conference standings with a 6-2-0-0 record.  The three Blades wins came at the end of a four-game Alberta road trip that began last Tuesday night with a 5-4 loss to the Red Deer Rebels with Davidson tallying two assists.  The next night in Edmonton, Davidson matched a season-high with a goal and two assists earning third star honours in a 5-3 victory that handed the Oil Kings their first loss of the season.  His weekend included one assist as part of a 3-0 win over the Calgary Hitmen on Friday, then two assists as second star of a 3-2 shootout win over the Lethbridge Hurricanes on Saturday.  Davidson’s point total last week included four even strength marks and four on special teams including three with the man advantage.  He is the second member of the Blades to earn CHL Player of the Week honours in three weeks this season following forward Kirby Dach.

A 20-year-old from Moosomin, Sask., Davidson is playing in his fifth WHL season since joining the league as a third round pick of the Kamloops Blazers in the 2013 WHL Bantam Draft.  The majority of his career was spent in Kamloops playing 124 games for the Blazers before a trade led him to the Regina Pats where he finished the 2016-17 campaign and started 2017-18.  Since being acquired by the Blades last season his tenure has included 34 games where he amassed 28 points including two goals and 10 assists for 12 points in eight games this season.