Black Excellence: Brathwaite leaving his mark in the pros 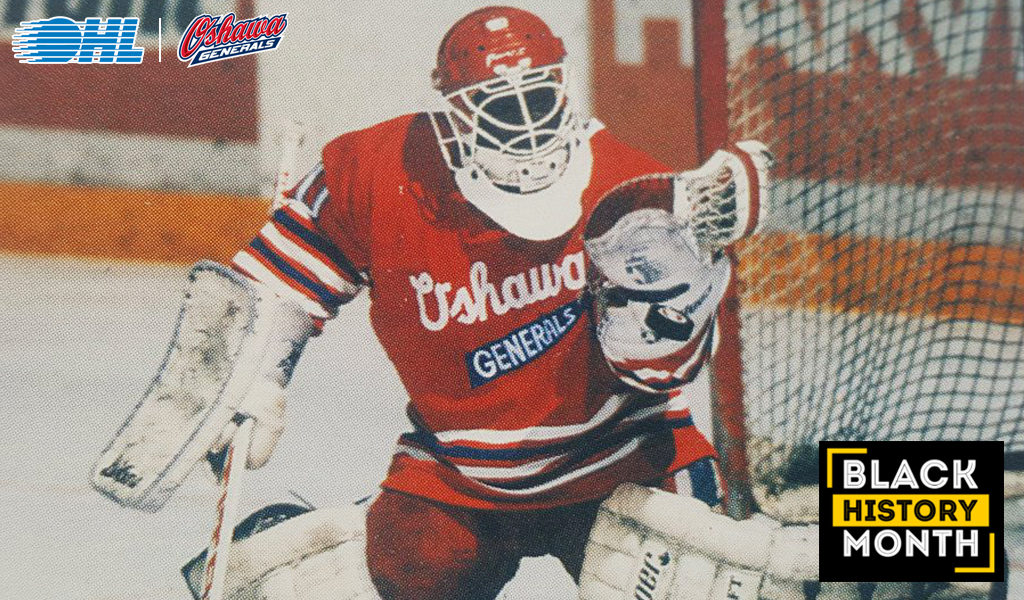 In the 1989-1990 season, Fred Brathwaite started the year as a 17-year-old from Ottawa, there wasn’t much more to it. Throughout the season, he supported starting goalie Kevin Butt in a backup role, holding his own with 11 wins in 20 games. Fast forward to May and Brathwaite becomes an Oshawa hero and household name.

Appearing in only the championship final, Brathwaite calms the nerves of more than 17,000 in attendance and helps bring the Generals to their fourth Memorial Cup championship.

Brathwaite credits his family and his parents for what he was able to do on May 13, 1990, but also for players before him that helped grow the sport.

Remembering his time in Oshawa, he is thankful for the opportunities he was given as a General.

This is his #BlackExcellence.

“Obviously knowing there were the guys like Willie O’Ree, and realizing how much those guys meant and how they were able to build the game and give me and other different players whether if they’re black, white, even women, whatever it is this opportunity to be playing sports now.”

Brathwaite says now that Black History Month has consistently been growing more important as he grows older and sticks around the sport.

“I’m in Henderson right now, in Vegas, and I’m here with Joel Ward, who’s another coach with myself and then there are two other black guys on this team, which is something you would never see even a couple of years ago, you know. So for me, it’s huge. It’s a big thing, and I’m happy to be a part of it. I’m still trying to learn more about it as well.”

Today, Brathwaite is the goalie coach for the AHL’s Henderson Silver Knights, the top affiliate of the NHL’s Las Vegas Golden Knights.

Being from Ottawa, Brathwaite says he did not experience a great deal of racism his way. He says he knows it was there, but he knew himself as “Freddy the hockey player, not Freddy the Black guy.”

In 2021, it is easy for Black athletes to feel a lot of pressure when they are representing an entire community in the sport they are playing. For Brathwaite, he never felt that way while he played, he just wanted to play the sport he loves.

“I was lucky the way my parents brought me up. When I was playing hockey, I was just another player out there,” he said. “Growing up I played with Kevin Weekes, and the great thing about that was my parents and his parents kind of grew up together in Barbados. So, we kind of knew each other.”

It was through Weekes that Brathwaite met Kirk Brooks in Toronto. Brooks eventually started up a hockey school for Black Children, Skillz Hockey, and this is when Brathwaite realized that people looked up to him.

“That’s where I kind of realized the level I was at, that these kids kind of knew who I was and looked up to me because before that, I never really knew there were Black people that look it up to me and say, ‘Hey, wow, that’s Fred Brathwaite, like he could play hockey and be a role model’.”

Having a role model wasn’t new to Brathwaite though, as growing up he idolized Edmonton Oilers legend Grant Fuhr.

“The biggest thing in my looking up to him was just how good he was and what an athlete he was,” Brathwaite said. “Again, back in those days, we didn’t really look at the color of his skin. I guess we kind of did, but it was more just his skill level that drew me to him.”

Not only did he look up in awe at Fuhr’s skill level, but he also took it upon himself to earn great accomplishments on his own as well. Brathwaite describes his ‘I did it moment’ in three steps, playing in Oshawa, making the NHL, and representing Canada on a national stage.

“Being able to put on that flag is a huge thing and great accomplishment for myself as well, for someone who everyone and anyone who thought was never going to be able to play at that level.”

Brathwaite knows there are more kids like him out there trying to play the game of hockey, and that this is where the sport can make some changes in its accessibility.

“Introducing the sport is huge, as a lot of people come to Canada and are learning about hockey at an early age, so getting it into the schools is a big step,” he said. “I think just even with that, teaching kids about racism is just as an important responsibility. In my opinion, parents now, are the ones who are going to teach our kids down the road. Then hopefully, those kids will teach their kids.”

Brathwaite says if those things can be worked on, every child out there who dreams of playing hockey will be able to achieve that dream.