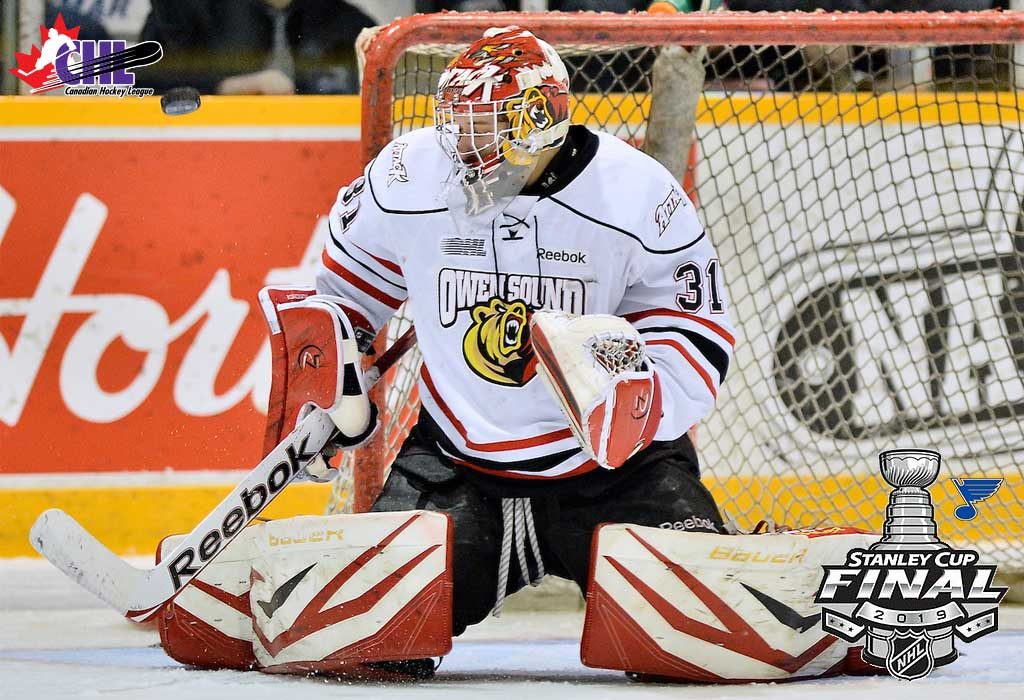 It was an expected outcome, given his position on the team’s depth chart, but it did result in a complication – where would Binnington play? With spots with the NHL club and minor-league affiliate filled by netminders the franchise perceived as more promising, the Richmond Hill, Ont., native was placed on waivers, free for the taking. He went unclaimed.

The decision was then to send Binnington to the ECHL – two tiers below hockey’s highest level – until the two sides came up with a more suitable solution as Binnington was loaned to Providence, the top minor-league club of the Boston Bruins. There, Binnington was part of the regular rotation as he appeared in 28 games and played alongside the likes of other youngsters like defencemen Matt Grzelcyk and Connor Clifton.

When the season wrapped, Binnington earned a new one-year, two-way extension with the Blues, a transaction that made barely a blip in the headlines last July. After all, his path to life in the NHL seemed unlikely in St. Louis, where the top job was filled by Jake Allen (Drummondville Voltigeurs) and with free-agent addition Chad Johnson holding down the second-string duties. It was back to the minors for Binnington last fall, as he cleared waivers once again and was assigned to the Blues’ affiliate in San Antonio. There, Binnington went to work, winning 11 of his 16 appearances, seemingly biding his time while a struggling Blues squad that sat dead last in the entire NHL sought answers of its own.

With Allen struggling and a new coach in tow, Binnington was recalled in the year, as the former third-round pick from the 2011 NHL Draft was thrust into the crease with a desperate Blues squad looking to save its season. But there was no time for modest beginnings, as Binnington went undefeated in regulation through his first five starts, and eventually held down an incredible 13-1-1 record through his first career season. Save for a 13-minute showing with the Blues back in the 2015-16 campaign, Binnington was a new face in the NHL, ready to make up for lost time, and along the way drag a Blues team that many pundits had picked as a Stanley Cup favourite out of its early season deficit.

In the end, Binnington proved to be just what was needed. In all, he appeared in 32 games, coming away with a remarkable 24-5-1 record, coupled with a league-best 1.89 goals-against average as well as a .927 save rate that also ranked within the top five, earning him a nomination for the Calder Memorial Trophy, presented to the NHL’s rookie of the year. Along the way, he also set a handful of franchise records by goaltenders, including the most shutouts with five as well as the single-season franchise record for wins by a freshman netminder with 24, doing so in just 32 appearances.

Meanwhile, the 2019 postseason has seen St. Louis oust favourites like the Winnipeg Jets and San Jose Sharks, in addition to knocking off the Dallas Stars in overtime of a winner-takes-all Game 7. Fast forward to June and Binnington and the Blues have exorcised the club’s longtime playoffs demons as St. Louis is competing in the Stanley Cup Final for the first time in 49 years as the team goes head-to-head with the Bruins, a familiar matchup for Binnington as he now faces off with many of his former Providence teammates.

Much like his regular season performance, Binnington has been a key reason for the Blues’ postseason success, shutting the door and emerging as a serious candidate for the Conn Smythe Trophy as the most valuable player of the playoffs should the Blues win the Stanley Cup for the first time in franchise history. Of course, winning is familiar territory for Binnington, the former Owen Sound Attack netminder who was a part of the OHL squad that won the J. Ross Robertson Cup in 2011, while he now hopes to bring that championship pedigree to the Gateway City.

A steady, calm presence since his arrival earlier this season, most impressive about Binnington may be his uncanny ability to bounce back from a rare poor performance. That came most recently in Game 4 of the Stanley Cup Final after Binnington was relieved just past the halfway mark of the previous contest after he surrendered five goals on just 19 shots. It marked the first time that Binnington hadn’t finished a game since being recalled to the big club, and the first appearance for Allen since toward the end of the regular season in early April. As it happened, Binnington was back at it in Game 4 against the Bruins, coming up with 21 saves as the Blues notched a 4-2 victory to tie the Stanley Cup Final at two wins a piece.

Such resiliency by the netminder may have been best summed up by Binnington’s teammate and London Knights graduate Patrick Maroon.

“I think everyone feeds off him, the way he’s handled himself since he’s stepped foot in that NHL locker room,” Maroon told Louie Korac of NHL.com. “It’s been unbelievable. Nothing really seems to faze him. He’s got that swagger, he’s got the confidence, and it carries into the team and how he plays and how we play.”