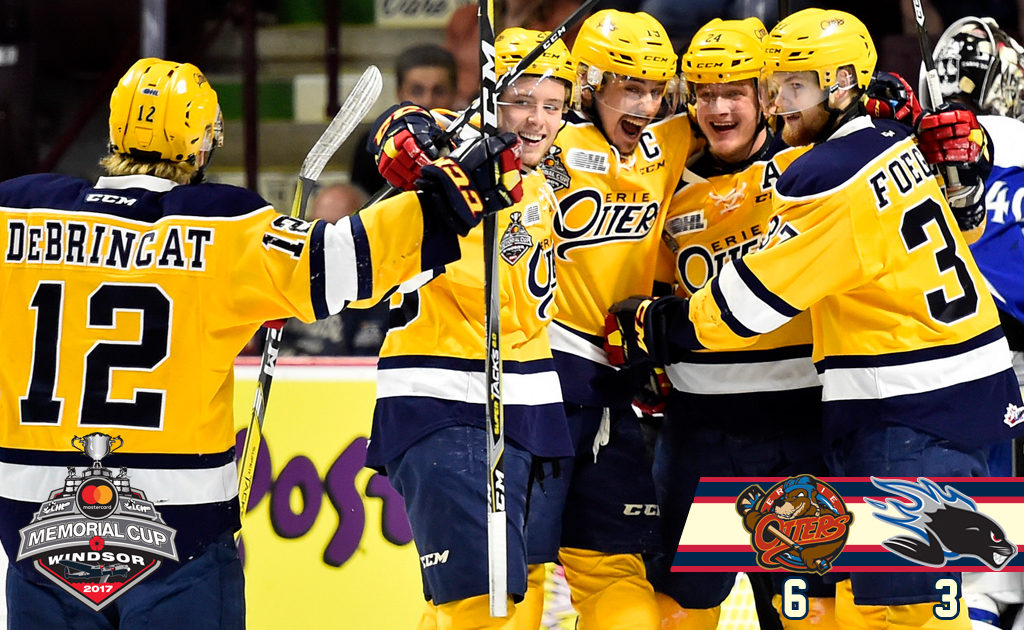 The Mastercard Memorial Cup Semi-Final played out with a much different tone than Monday’s 12-5 result between the Erie Otters and Saint John Sea Dogs.

Entering the third period tied at two, Erie scored four times in the final frame with rookie forward German Poddubnyi netting the eventual game winner in a 6-3 victory, setting up an all-OHL Mastercard Memorial Cup Final in Windsor on Sunday.

Saint John put up fierce resistance, but Erie came through when it mattered most to set up a date with the host Windsor Spitfires in the 99th Mastercard Memorial Cup Final on Sunday night.

“It feels kind of surreal that we’re there,” said Otters captain Dylan Strome who scored a goal in the win. “We’ve had 5-28-17 on the board in the dressing room for a long time. It’s kind of been our thing that we look at before we go onto the ice every time and that’s what we’re here for.”

Unlike their 12-goal output on Monday, the Semi-Final clash saw the Sea Dogs adapt to Erie’s speed in transition, forcing them to earn their scoring chances.

“The first time we played them we probably had 15 odd-man rushes and tonight we only had two or three. They played really well and credit to them, they’re QMJHL champions and they battled us hard tonight.”

Erie’s third period surge came after words of encouragement from head coach Kris Knoblauch. The Otters took the lead just 2:38 into the third period on Strome’s sixth of the tournament.

“He went around the room and told each one of us what we needed to do, what we’re good at and what had to happen,” Strome recalled. “It fired me up, it fired a lot of guys up and we rolled from there.

“Whatever he said to us, it worked and that’s why he’s the best coach in the CHL.”

Saint John came out of the gate strong but the Otters drew first blood, marking the seventh consecutive game that the team to score the opening goal went on to win.

OHL Defenceman of the Year Darren Raddysh collected his third of the tournament at 9:56 after Warren Foegele sent the puck up ice. Raddysh won a footrace, outmaneuvering his Saint John check to carve a path to the net and beat goaltender Callum Booth on the forehand.

Saint John responded four minutes later as 17-year-old phenom Joe Veleno scored his third goal in four games, batting a puck out of the air in the slot as Spencer Smallman and Julien Gauthier gathered assists.

After Booth provided early second period saves off DeBrincat and Christian Girhiny, Erie struck again, this time on a power play goal from Taylor Raddysh who put the Otters ahead on a shot from the slot at 10:57.

After managing to hold the Erie power play at bay on four of five consecutive opportunities, the Sea Dogs got a man advantage of their own and made it count, tying the score at two with 48 seconds left in the second.

Carolina Hurricanes prospect Julien Gauthier finished off a quick passing play with Matthew Highmore and Mathieu Joseph, beating Troy Timpano up high as the game entered the third period all tied up.

The Otters owned the third, getting goals from Strome, German Poddubnyi, Taylor Raddysh and an empty netter from Warren Foegele while getting a number of key saves from Timpano in the crease.

Erie’s fourth line set up Poddubnyi’s game winner as big winger Cameron Lizotte forced a turnover with a hard forecheck. Ivan Lodnia took advantage of a Saint John miscue, centering for Poddubnyi who beat Booth with a quick release 3:45 into the period.

Raddysh’s second goal of the night at 12:31 of the third maintained his tournament scoring lead as he sits atop the leaderboard with 11 points (5-6–11) over four games.

Thomas Chabot scored his second of the tournament for Saint John with 3:32 remaining, but it wouldn’t be enough as the QMJHL champions saw their season come to an end.

“It’s a close knit group,” said Sea Dogs head coach Danny Flynn after the loss. “There’s lots of love in that room and lot’s of character and guys that grew up together and came in as boys and are going to go out as men.

“We’re highly competitive, we hate to lose pre-season games, so you can imagine the sting of losing the Memorial Cup, especially a 2-2 game, but hey, they had seven looks on the power play and that was the turning point of the game.”

Erie went 2-for-7 with the man advantage compared to Saint John’s 1-for-2 mark.

“I fielded a few questions this morning about our goaltending, and I thought the difference tonight was Troy. Our weakest period was probably the third and he was outstanding and made some really key saves.”

Timpano finished the night with 20 saves as the Otters improved to 3-1 in the tournament and now begin preparations for Sunday’s Mastercard Memorial Cup Final.

Erie will take on the host Windsor Spitfires in a rematch of Wednesday’s round robin finale that saw the Spits take a 4-2 win despite being outshot 35-19.

The 99th Mastercard Memorial Cup Final will feature an all-OHL matchup for the first time since 1993 when the Sault Ste. Marie Greyhounds defeated the Peterborough Petes 4-2 on home ice.

The game gets underway at 7:00pm ET/4:00pm PT on Sportsnet, TVA Sports, NHL Network and CHLLive.ca.