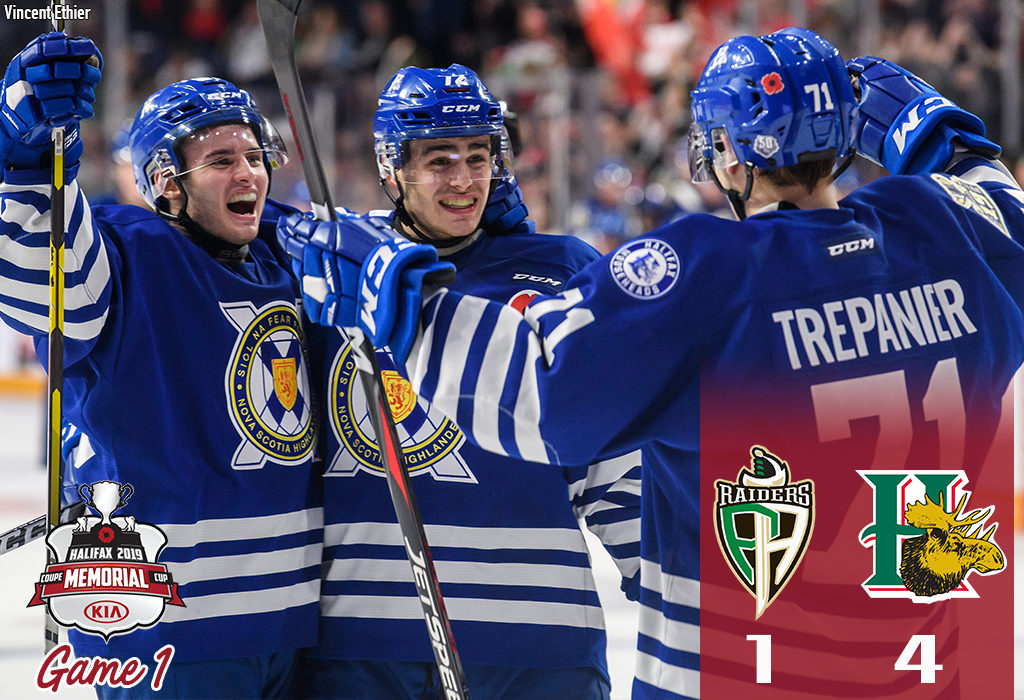 After a season of anticipation and a disappointing finish to the QMJHL Championship Series, the Halifax Mooseheads came out strong, sending a capacity crowd of 9,926 home happy following a 4-1 win over the WHL champion Prince Albert Raiders to kick-off the 2019 Memorial Cup Presented by Kia.

The trio of Samuel Asselin, Maxim Trépanier and Raphaël Lavoie was dominant in the early going before the Mooseheads tightened things up late, limiting the visiting Raiders down the stretch to close out an important tournament-opening victory.

First goal of the 2019 #MemorialCup Presented by @KiaCanada goes to the @HFXMooseheads forward who tied for the 2018 tournament lead with five ? pic.twitter.com/823hwPEJZ9

Trepanier finished the night with three assists while Asselin earned first star honours with a goal and an assist.

“In our meeting before the game it was pretty clear that the first win is pretty big,” said Asselin post-game. “As soon as you can do that you take some of the pressure off your back and that’s what we did tonight.”

A man who knows a thing or two about coming up big at the Memorial Cup, Asselin was in on both of Halifax’s opening goals as a capacity crowd erupted twice in the first period.

Coming off a 20-goal playoff showing, draft eligible winger Lavoie did laymen’s work down low to find Asselin coming down the middle midway through the opening frame as he beat his man to the net and chipped a quick release up over the shoulder of Ian Scott.

Some crafty puck work from Trépanier entering the offensive zone led to Halifax’s second of the night as he connected with Asselin who moved the puck on to a waiting Xavier Parent for the finish with 1:16 to spare.

“We’re fast and we don’t make a lot of turnovers,” said Asselin of his line’s contributions in Game 1. “Lavoie is a great player and is going to get drafted high. When Trépanier is playing with the confidence he is right now he is really dangerous too.”

A physical first period saw the Raiders come up empty on three consecutive power play opportunities but they’d find their way onto the scoreboard midway through the second courtesy Noah Gregor.

Prince Albert came up with three big penalty kills of their own in the opening half of the period as timely shot blocking and some key saves from Scott kept them within two.

Gregor managed to tip-home a Max Martin point shot at the midway point of the period to bring the Raiders within one, a deficit that would be short-lived as the Mooseheads cashed in on their fourth power play opportunity of the night.

Overage blueliner Jake Ryczek stepped into a one-timer on a pass from Trépanier with 4:08 on the clock, beating Scott across his crease to reinstate the two-goal cushion after 40 minutes.

The Raiders pressed hard to close out the second as the right-handed trapper of Alexis Gravel came up big on two different occasions. Dante Hannoun nearly brought Prince Albert within a goal, sliding a puck across the goal line of a gaping cage as things remained 3-1 after two.

Halifax didn’t give Prince Albert much in the way of room in the third, limiting the Raiders to just four shots while registering 15 of their own.

Scott kept the score close with a number of timely saves before Antoine Morand put the game on ice with an empty netter inside the final two minutes.

“Our guys aren’t used to that really,” said Raiders head coach Marc Habscheid following the loss. “We’re from a small town, play in a small building and all of a sudden the bright lights kind of hit us and we weren’t very good, so that’s on me. I have to talk to them about that a little bit more and prepare them better.

“They’re nervous, they were missing some passes they usually don’t miss. They’re a great bunch, they try but nerves got the best of them a little bit tonight.”

Halifax outshot Prince Albert 37-24 while controlling the faceoff circle with a 61 percent success rate. The Mooseheads boasted the QMJHL’s best penalty kill this past season and held the Raiders to 0-for-4 on the night.

The Mooseheads get a day off on Saturday before returning to action against the OHL champion Guelph Storm on Sunday night. Prince Albert will look to rebound following two days of rest as they battle the QMJHL champion Rouyn-Noranda Huskies on Monday.