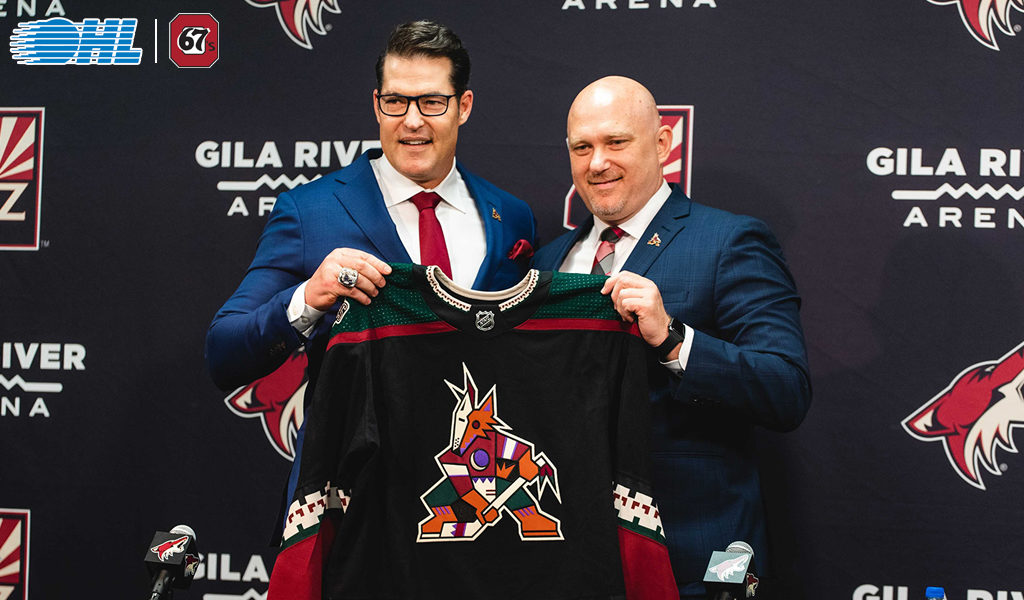 GLENDALE, ARIZONA — Arizona Coyotes General Manager Bill Armstrong announced today that the Coyotes have signed André Tourigny (Tour-ee-knee) to a three-year contract to serve as the club’s head coach. Tourigny becomes the 19th head coach in franchise history. As per club policy, terms of the contract were not disclosed.

“We are very pleased to name André as the new head coach of the Arizona Coyotes,” said Armstrong. “André is a tremendous person and one of the best young coaches in the game today. He is a winner, a great teacher and a strong communicator who has a proven track record of developing young talent. We are confident that he is the right person to lead our team on the ice and we are thrilled to have him in our organization.”

“It is an honor to be named as the head coach of the Arizona Coyotes,” said Tourigny. “I would like to thank Mr. Meruelo, Bill Armstrong and Xavier Gutierrez for providing me with this incredible opportunity. I am looking forward to working with this group and our players to build a winning culture here in the desert for our loyal and passionate fan base.

“I would also like to thank everyone at Hockey Canada and the Ottawa 67’s for all their support the past few years. It was an honor and a privilege to coach Team Canada, and I am very grateful for the opportunity to represent my country. The 67’s are a first-class organization, and I wish them all the best in the future.”

Tourigny joins the Coyotes after spending time with Hockey Canada’s coaching staff as an assistant coach at the 2021 IIHF World Championship in Riga, Latvia. Tourigny was on a one-year loan to Hockey Canada from the Ottawa 67’s (OHL). He helped lead Canada to a 3-2 gold medal victory over Finland. The Nicolet, Quebec native originally signed a one-year contract with Hockey Canada on March 24, 2021, to participate in four international tournaments, becoming the first full-time coach with Canada’s men’s program since 2005.

OFFICIAL: The @ArizonaCoyotes have hired Andre Tourigny as the 19th coach in franchise history. @NHLdotcom has more ➡️ https://t.co/vq86N2jwmA pic.twitter.com/7a2MipUWND

In addition to his four appearances at the World Juniors, Tourigny led Canada’s National Men’s Summer Under-18 Team to a gold medal as head coach at the 2018 Hlinka Gretzky Cup and won gold as an assistant at the 2008 Ivan Hlinka tournament.

Tourigny joined the Ottawa 67’s of the Ontario Hockey League (OHL) as Head Coach and Vice President of Hockey Operations prior to the 2017-18 season. He was the recipient of the Matt Leyden Trophy as OHL coach of the year in back-to-back seasons (2018-19 and 2019-20) as well as the Brian Kilrea Coach of the Year Award as CHL Coach of the Year (2019-20).

Bear is off to the show!

Your mark on this organization will always remain. Thank you for everything, Coach.❤️#ThankYouBear | ?️: https://t.co/akncgboQl7 pic.twitter.com/965yTsJcbt

The 47-year-old Tourigny previously spent 11 seasons with the Rouyn-Noranda Huskies (2002-13) and one season with the Halifax Mooseheads (2016-17) of the Quebec Major Junior Hockey League (QMJHL).

In his 11 years with Rouyn-Noranda, Tourigny’s team qualified for the playoffs in all but one season while he posted a 337-336-20 record in 693 regular season games, which set a QMJHL record for most games coached with one franchise. In 2005-06, Tourigny received the QMJHL Ron Lapointe Coach of the Year Award.

The veteran coach also worked in the NHL including three seasons as an assistant coach with the Colorado Avalanche (2013-15) and the Ottawa Senators (2015-16).