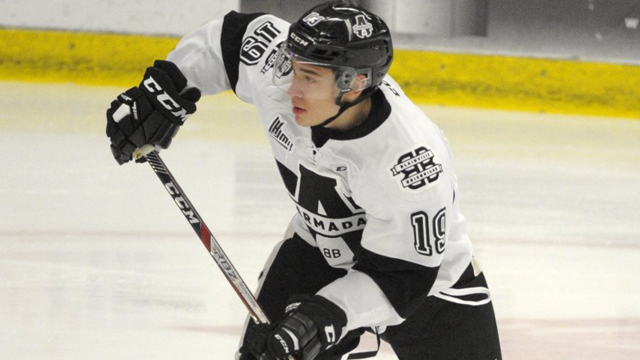 Toronto, ON – The Canadian Hockey League today announced that QMJHL top scorer Alex Barré-Boulet of the Blainville-Boisbriand Armada is the CHL Player of the Week for the week ending December 3 after scoring four goals and four assists for eight points in two games with a plus-minus rating of plus-3.

Barré-Boulet contributed back-to-back four-point performances for the Armada who won both games last week improving their first place record to 19-5-2-0.  He scored two goals and two assists in both contests and earned first star of the game recognition twice including Friday night in a 6-1 win over the Charlottetown Islanders, and Sunday in a 5-4 triumph against the Victoriaville Tigres where he produced the late game-tying marker and then the overtime winner.  The game-winner was his league-leading ninth of the season and extended his point-streak to 18 games which both tie Armada franchise records.

A 20-year-old from Montmagny, Quebec, Barré-Boulet is playing in his fourth QMJHL season after being a sixth round pick of the Drummondville Voltigeurs in the 2013 QMJHL Entry Draft.  He joined the Armada from the Voltigeurs midway through last season and helped the club reach the QMJHL Finals contributing 31 points in 20 playoff games.  So far this season he leads the league with 45 points in 25 games including 22 goals and 23 assists.

Also considered for the award this week was 2018 NHL Draft prospect Calen Addison of the Lethbridge Hurricanes with one goal and seven assists for eight points in four games, and Joseph Garreffa of the Kitchener Rangers with eight assists in three games.