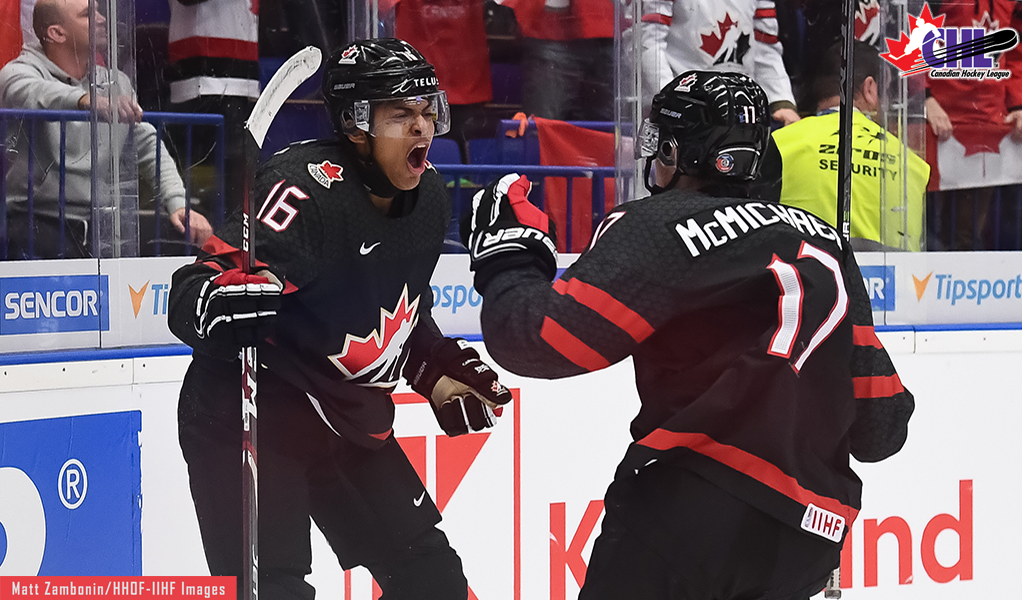 After seeing less than four minutes of play through 40 minutes of action in Sunday’s gold medal game between Canada and Russia at the 2020 IIHF World Junior Hockey Championship, the Niagara IceDogs forward made the most of his opportunity in the waning moments of the final frame when he burst into the opposing zone and tucked a backhander by Russia netminder Amir Miftakhov.

It marked Thomas’ only goal of the tournament, and a memorable one to boot as it stood as the eventual game winner in the 4-3 final that granted Canada its 18th gold medal in World Junior history.

It’s a moment that the Scarborough, Ont., native will remember for a lifetime, one that he has already relived many a time through video replay.

“Every time I watch it, it just kind of looks like someone else who kind of skates like me. It’s crazy, just watching it,” Thomas recalled to Nick Dixon of CTV News Toronto. “I had a feeling we were going to score, and one-by-one we tied the game up.”

“I wouldn’t say that I was surprised (that I got a shift so late in the game) because I had a weird feeling that (coach) Dale (Hunter) was going to call me,” added Thomas, per Andrew Podnieks of IIHF.com. “Then Dale put us out there. I wasn’t playing a ton, but I wasn’t surprised. I thought it would happen, and it did, and I ended up scoring and thought, ‘Wow, that really happened.’ It was meant to be. After the game, Dale told me he had a hunch that I was going to score. Some things are just meant to be.”

.@AkilThomas2 returns home as the hero of the @IIHFHockey 2020 World Junior Championship, and he had a surprise waiting for him as his mom made sure she was the first person to greet him at the gate ❤️🇨🇦#GoKingsGo pic.twitter.com/lOWL08XNHW

The 2020 World Juniors marked the fourth time Thomas has represented the Great White North on the national stage, one that culminated with an incredible reception when he arrived back in Canada from the hosting Czech Republic.

“For him to be that one who got it, and made it like a worldwide thing, was everything to me,” said Akil’s mother, Akilah, one of many awaiting and cheering on the arrival of the players back home. “It meant so much.”

To regular viewers, Thomas’ ability to raise his game when it matters most comes as little surprise. Over four years with the IceDogs, the Los Angeles Kings prospect netted 11 game winners, including a pair this season.

“The big time players show up in big time games and big time moments,” added IceDogs general manager Joey Burke. “And it’s never been truer really than it is with Akil. He’s that kind of guy.

“It means the world, you look at all the high-end goals and big moment goals that Akil scored for us, and they pale in comparison to this.”

.@SNkylebukauskas spoke with the newest 🇨🇦 hero, @AkilThomas2, about what it was like to represent Canada and to be apart of the pre-game ceremony. pic.twitter.com/zLO9lJ8vtl

The Niagara region also marked January 9, 2020, as ‘Akil Thomas Day’ capped by one final game on home ice where the IceDogs and fans showed their appreciation for their outgoing captain.

One last game in his first OHL home for @AkilThomas2.

Congratulations on your Gold medal, and your golden goal. Niagara will always be proud of you, and your accomplishments!#AlwaysADog pic.twitter.com/gbExnwise4

Thomas will forever be etched in Team Canada history and with a gold medal in tow, will close out his OHL career with the Peterborough Petes hoping to add another prize, or two, to his trophy case.

Past 10 Golden Goal Scorers for Canada: