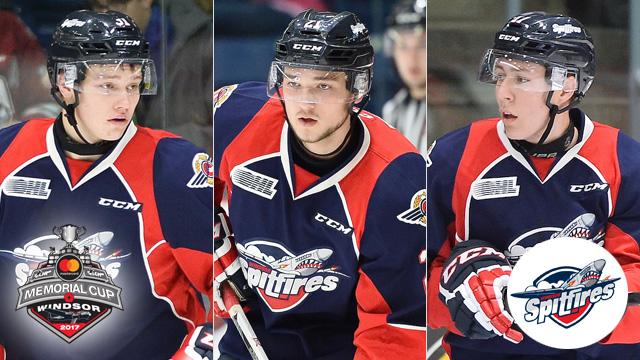 Though we don’t know what the coming season holds for the 2017 Mastercard Memorial Cup host Windsor Spitfires, we do know this; they’ll be playing come May.

The Spitfires underwent a busy summer that featured three players selected in the first round of the NHL Draft followed by the addition of three veteran forwards to the depth chart in Anaheim Ducks prospect Julius Nattinen, overage shooter Jeremiah Addison and crash-and-bang winger Mike Baird.

With the 2016-17 season just days away, the city is excited for the Mastercard Memorial Cup quest that lies ahead, and the Spitfires aren’t just looking to host.

“The town is excited,” said Spitfires GM Warren Rychel. “We’ve seen a spike in season ticket purchases and we’ve had a lot of volunteers step up to help with the cause. We’re going to be great hosts, but we don’t just want to host it, we want to win.”

While the Spits are making big contributions to hockey in the NHL’s Canadian markets, they also feature standout Arizona Coyotes prospect Christian Fischer, the club’s leading scorer from last season who could be destined for the American Hockey League pending GM John Chayka’s decision.

“Fischer is going to get a long look,” said Rychel. “We expect to get him back, and I know Arizona doesn’t want to rush him. In his one season in the OHL we saw big improvements. With another season and a Memorial Cup run under Rocky Thompson and the other coaches I think he could really build off that and continue his development.”

If Fischer were to return to the club, he’d give the Spitfires another 19-year-old forward along with Nattinen, Baird and fellow veterans Hayden McCool and Aaron Luchuk.

Top 2017 NHL Draft prospect Gabriel Vilardi will miss the opening month of the season with a knee injury he suffered at Canada’s National Under-18 Selection Camp in August.

“We’re going to have to wait on Gabe for a little while,” said Rychel of the injury. “His ability to play and score goals and do so many great things made him the second overall pick in the OHL Draft last year. It’s worth the wait, he’s got a big year ahead of him and we just have to be patient.”

Logan Brown more than familiar with #Sens. (via https://t.co/DebFN9BxBa)

“He really came on strong and started shooting the puck more in the second half of the season,” said Rychel of Brown. “His fitness has improved as he’s continued growing into a man’s body. He’s that big two-way centreman that every coach covets and we’ll be expecting big things from him.”

The aforementioned Sergachev and Stanley will anchor Windsor’s blue line while overagers Jalen Chatfield and Patrick Sanvido, two of four 20-year-olds currently on the roster along with forwards Addison and Cristiano DiGiacinto, will also play important roles.

Sergachev, who was named OHL Defenceman of the Year last season, recorded 17 goals from the back end, the most by a Spits rookie defenceman since 1979.

.@sergachev31 has all of the attributes to be a stud at the NHL level.
READ | https://t.co/jPEP3xFm0U #GoHabsGo pic.twitter.com/0Ba2Q39Hjp

“He’s worked hard on his shot,” commented Rychel. “He’s been a guy who is willing to learn every day and that might be his biggest strength. He’s always listening and learning and that’s key for a young player’s development.”

Stanley, who owns a 6-foot-7, 231Ib. frame, has come a long way with his skating since arriving in Windsor as a first round pick in 2014.

“Stanley has put a lot of work into his skating,” said Rychel. “He’s got a ways to go before he’s at an NHL level with that, but he’s been focused on it. He has soft hands and he distributes the puck really well. We’re looking forward to seeing him more on the power play this season.”

A big @NHLJets blue line could get even bigger with the addition of 6’7″ @loganstanley_17. https://t.co/ozguv1eGsX pic.twitter.com/7Io43oJKCy

While Windor’s roster is loaded with size, skill and veteran talent, a 17-year-old slated to open the season as the club’s starting goaltender may raise eyebrows.

Rychel is quick to inform those questioning that Michael DiPietro isn’t just any 17-year-old. The 6-foot, 193Ib. puckstopper won the OHL’s Dinty Moore Trophy with a lowest rookie goals-against-average of 2.45 last season.

“He’s the real deal back there. I’ve been watching him since he was 10-years-old when he played Triple-A with my son. His compete level and his fitness level are both off the charts. He has the trust of his teammates and we feel good with him in the crease.”

While the Spits will indeed be competing for the Mastercard Memorial Cup when the dust of the 2016-17 playoffs settles, winning an OHL title won’t be easy. The OHL’s Western Conference is loaded with perennial powerhouses in the reigning champion London Knights, 2016 West Division champion Sarnia Sting and the consistently competitive Kitchener Rangers among other clubs.

“It’s an exciting time,” Rychel concluded. “We’ll be hosting the Memorial Cup, but we don’t want to just host it, we want to win it all.”

For more information about the 2017 Mastercard Memorial Cup visit mastercardmemorialcup.ca.