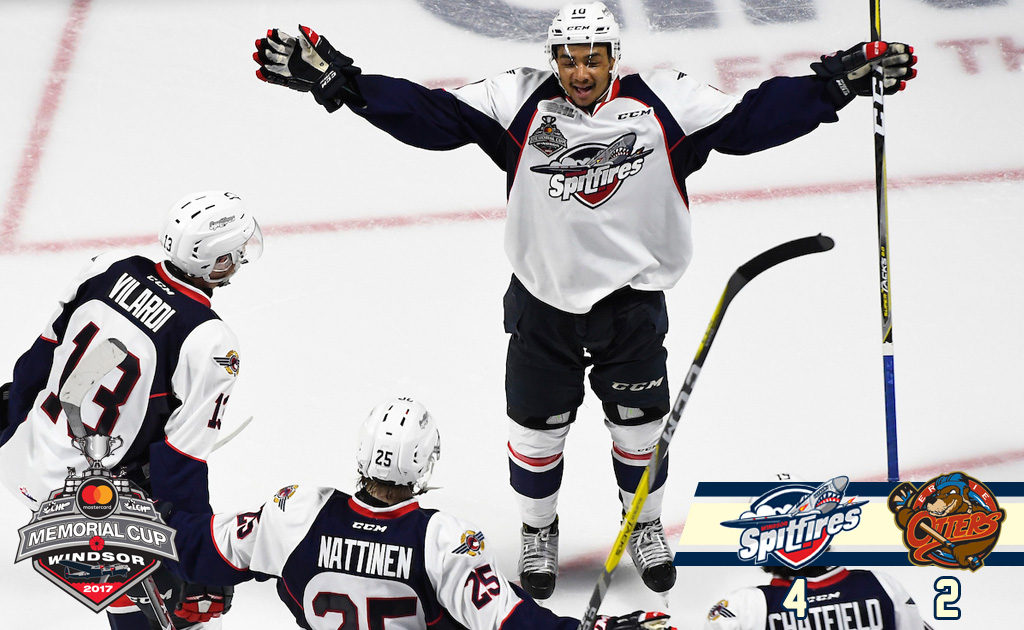 The Windsor Spitfires are one win away from a Mastercard Memorial Cup title.

A showdown of 2-0 OHL teams didn’t disappoint on Wednesday as the host Spitfires bested the OHL champion Erie Otters 4-2 before 6,136 at the WFCU Centre.

Vilardi finished the night with four assists while DiPietro made 33 saves, several of them on high quality chances as Erie outshot Windsor 35-19.

“It’s an exciting feeling,” said Addison of his second career OHL hat-trick. “The fans have been great all year and it’s been an awesome atmosphere through this whole Memorial Cup.

“I was happy I could give them something to celebrate and for them to be able to throw their hats on the ice.”

DiPietro’s strong play was central to Windsor’s success in the game as Erie controlled the shot clock 30-10 over the final 40 minutes of play.

“Watching Mikey is really something,” Addison said of his 17-year-old goaltender. “When I see him make those huge saves I get more jacked up than I do when I score a goal,” he laughed. “He’s been fantastic for us and was again tonight.”

Windsor stormed out of the gate, a strong start that enabled them to climb out to a 3-0 lead, one Erie would never recover from.

“I’m extremely happy with how our team played tonight,” said head coach Rocky Thompson. “It wasn’t easy. You could see Erie was really pushing hard. Our guys had to really sacrifice and dig deep as you could see in the last few minutes.

“Everybody played a part from all six defencemen to all lines up front and once again Mikey DiPietro.”

The Spits played with purpose in the opening period, taking a 2-0 lead on a pair of goals from Addison.

Big 6-foot-7 defenceman Logan Stanley architected the first goal, making something out of nothing as he banked a puck off the boards, sending it in behind the Erie net where Vilardi won a battle to centre for an oncoming Addison at 5:50. He lifted a quick shot over the shoulder of Troy Timpano, off the post and into the net.

Windsor had outshot Erie 5-0 to that point. The Otters wouldn’t register their first shot on goal until the ninth minute of the first.

Addison increased Windsor’s lead to two just under 10 minutes later at 15:28, taking a drop pass from Vilardi before snapping a shot under the arm of Timpano on the short side from the top of the circle.

The Spits started the second on a two-man advantage and cashed in.

Montreal Canadiens prospect Mikhail Sergachev stepped into a one-timer on a pass from Vilardi that traveled through a crowd and past a screened Timpano just 43 seconds into the new period, putting the Spits up 3-0.

In desperation mode, Erie was knocking on the door moments later as Alex DeBrincat hit a goal post and Jordan Sambrook missed an open cage, glancing a shot off the side of the net.

The Otters did everything but score in the second period, outshooting Windsor 15-5 as DiPietro was forced into numerous key saves to preserve the shutout.

Windsor’s run of perfect hockey would end 8:10 into the third period as the Otters finally solved DiPietro, barreling him over in the process. Kyle Maksimovich crashed the net hard, following up on a Warren Foegele rebound to cut the Windsor lead to two as DiPietro was sent backward into his own net.

Just when it seemed the Otters had wrestled away full control of the momentum, Vilardi went back to work, winning a battle in front of the Erie net before Nattinen found Addison at the side of the goal to complete the hat-trick with 6:29 remaining.

Taylor Raddysh would find the back of the net on a power play with 2:26 to spare, slashing Windsor’s lead to 4-2 before a big Otters push in the game’s final shifts couldn’t generate anything further.

“I thought we did a lot of things well tonight, but our start was not what it needed to be,” Otters head coach Kris Knoblauch commented post-game. “We dug ourselves a hole that was much too big to recover from, but after that I thought we played well.”

“I think we felt really good about ourselves after that game,” said Knoblauch. “We had three of our lines play some of their best hockey and I just don’t think our work ethic was where it had to be in this game.

“I think we felt it was going to be easier.”

The win marks Windsor’s 11th straight at the Mastercard Memorial Cup dating back to the Rimouski round robin of 2009 where they went 0-2 before coming back to win four straight and capture CHL supremacy. The 11 consecutive wins are one shy of an event record set by the Kamloops Blazers (1992-95).

The Otters now regroup to prepare for a Semi-Final matchup with the Saint John Sea Dogs on Friday, a game that gets underway at 7:00pm ET/4:00 PT on Sportsnet, TVA Sports, NHL Network and CHL Live.