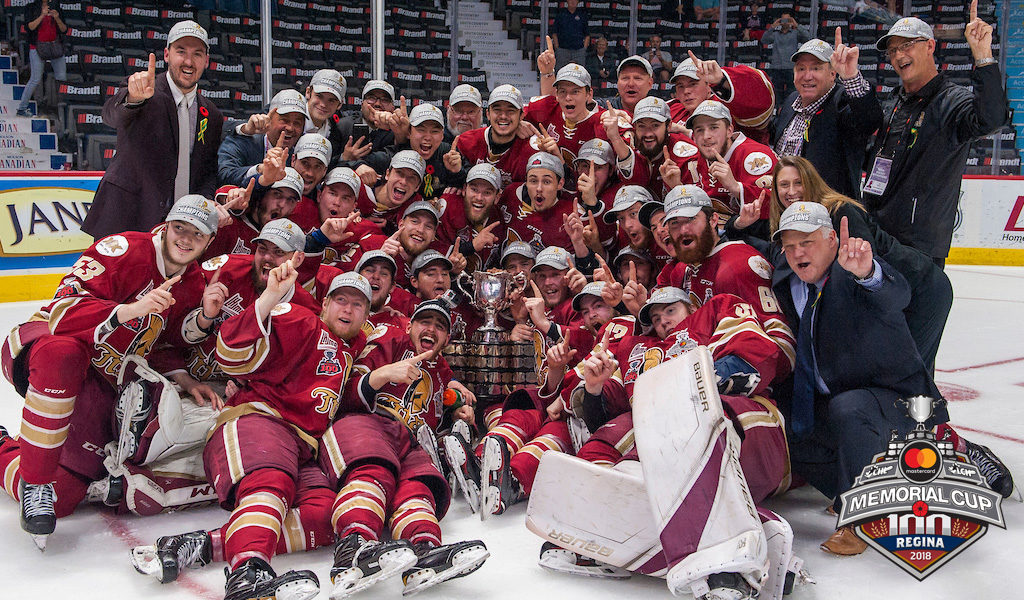 “Being the smallest market in the entire CHL, it’s a huge accomplishment for us,” said Titan head coach Mario Pouliot. “Four years ago we started from the bottom and we ended up tonight with the Memorial Cup. I’m so proud of our players, really happy for our owners who believed in the QMJHL product and we are really happy to bring the Memorial Cup home to our fans.”

“We passed through some tough times together but this group is really special,” added captain and fourth-year Titan veteran Jeffrey Truchon-Viel. “It’s just an incredible feeling and I can barely describe it.”

Goaltender Evan Fitzpatrick stopped all 28 shots he faced, securing the first championship shutout victory since the 2005 London Knights blanked Sidney Crosby and the Rimouski Océanic. Regina rookie Max Paddock did his part at the other end, turning aside 41 shots as the Pats were outdone 44-28 on the shot clock.

Overage defenceman Adam Holwell opened the scoring for the Titan with 3:50 left in the opening frame, taking a pass from Mitchell Balmas to walk in off the top of the circle and beat Paddock with a low shot, taking some life out of the sold out Brandt Centre.

The Pats were mainly limited to offensive attempts off the rush in the first as the Titan controlled the pace, outshooting Regina 12-5.

A scoreless second saw Acadie-Bathurst continue to press on the attack, putting Paddock to work as the youngster stopped all 24 shots he faced in the middle stanza. The Regina rookie thwarted high quality chances off the sticks of Mitchell Balmas, German Rubtsov and Ethan Crossman.

The Pats nearly broke their offensive silence with two minutes remaining in the second as the ever-dangerous Sam Steel fed Jared Legien off the rush, leading to a quick shot that rattled off the post and crossbar as the Titan continued to lead 1-0 after 40 minutes.

After Fitzpatrick was put to work early in the third with a denial of Steel from in tight, veteran sparkplug Samuel Asselin’s fifth of the tournament increased Acadie-Bathurst’s lead to two. Truchon-Viel chipped in with the lone assist as the Titan led 2-0 with 6:58 to go in the third.

After he had numerous scoring chances in the game, Ethan Crossman closed the deal, scoring an empty netter with 30 seconds to go as centreman Samuel L’Italien drew the lone assist.

The Titan played to an overall record of 3-1, outscoring opponents 17-12 to be crowned the QMJHL’s first Mastercard Memorial Cup champion since 2013 when the Halifax Mooseheads captured national supremacy three hours north in Saskatoon.

Truchon-Viel, Asselin and top 2018 NHL Draft prospect Noah Dobson were named to the tournament all-star team while Holwell earned the George Parsons Trophy as the event’s Most Sportsmanlike Player.

Regina’s Steel led the tournament in scoring with 13 points (2-11–13) in five games, claiming both the Stafford Smythe Trophy as tournament MVP as well as the Ed Chynoweth Trophy as leading scorer.

“The tournament was great, it was a great experience,” said Pats head coach John Paddock post-game. “Acadia is full marks for their win. I’ll describe it best and I basically mean it – we needed a second puck on the ice because for two periods they didn’t let us have it, so it’s tough to win.”

Coming from one of the smallest markets in the Canadian Hockey League, with a population of merely 12,000 citizens, the Acadie-Bathurst Titan represent in so many ways the heart of the CHL and Major Junior hockey in Canada, making it fitting to have them win the 100th edition of the Memorial Cup.

The Memorial Cup has been in competition since 1919, first presented in commemoration of the many great Canadian players who paid the supreme sacrifice in defence of their country in the First World War. Initially the symbol of the national junior championship, the Cup later signified Junior ‘A’ supremacy beginning in 1934 and Major Junior supremacy in 1971.

Competing annually, the winners of the Western, Ontario and Quebec Major Junior Hockey Leagues, along with a host Club, vie for the Memorial Cup Championship.