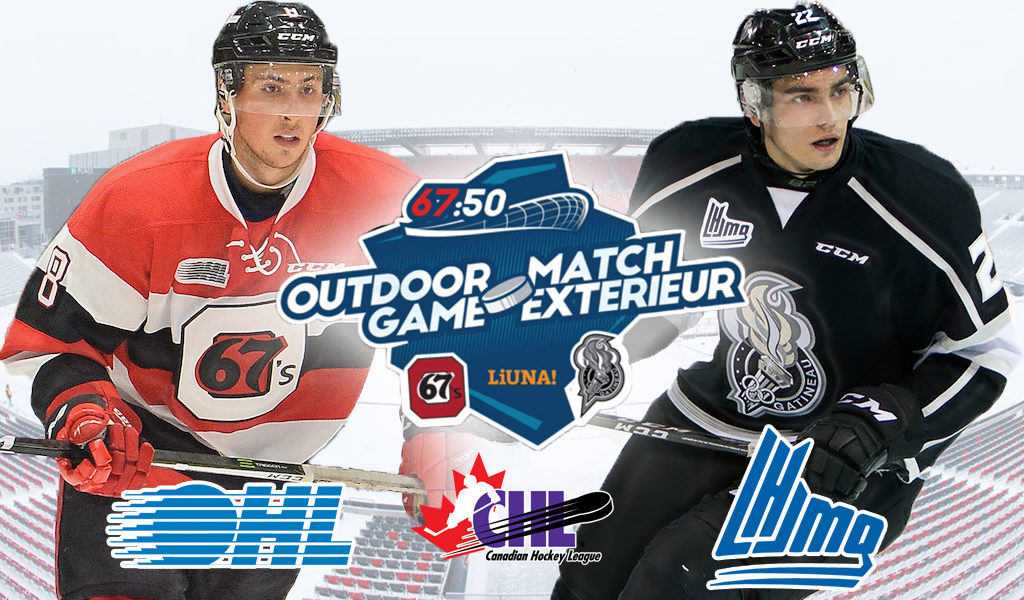 The seventh outdoor game in CHL history will be the league’s first ever interleague clash in such a scenario as the Gatineau Olympiques make the short journey across the Ottawa River to battle the Ottawa 67’s at TD Place Stadium in Landsdowne Park.

The 67’s and Olympiques rekindle an old rivalry that dates back to the early 2000’s when the two sides faced off eight different times during the regular season between 2000-02. Ottawa won five of those eight games in an era that saw the OHL win 15 of 28 interleague matchups against QMJHL opponents.

The outdoor matchup will be the third in OHL history after the Saginaw Spirit and Windsor Spitfires clashed along with the London Knights and Plymouth Whalers at Detroit’s Comerica Park in December 2013. The game between London and Plymouth set a CHL attendance record of 26,384 that still stands today.

Other past CHL outdoor games have included the QMJHL’s Shawinigan Cataractes defeating the Victoriaville Tigres 4-2 at the St-Tite Fairgrounds on January 23, 2015. A day later the Cataractes fell to the Quebec Remparts 3-2 in a shootout. Those two games drew a compiled total of 13,319 to the great outdoors.

The WHL featured a pair of outdoor games in 2011, with the Spokane Chiefs trouncing the visiting Kootenay ICE 11-2 at Avista Stadium on January 15, 2011. The Regina Pats and Calgary Hitmen drew a WHL record crowd of 20,888 to McMahon Stadium on February 21, 2011 in a game that saw the Pats win by a score of 3-2.

The WHL will host the next outdoor game on the schedule when the Moose Jaw Warriors visit the Mastercard Memorial Cup host Regina Pats at Mosaic Stadium on Sunday February 18, 2018.

The outdoor clash in the nation’s capital is part of Ottawa 67’s 50th anniversary celebrations as the team best known for producing CHL’s winningest head coach in Brian Kilrea has reflected on its rich past throughout this season.

The 67’s make a return visit to Gatineau to face the Olympiques at Centre Robert-Guertin on January 12, 2018.

Bundle up because it’s going to be a cold one! The 67’s and Olympiques drop the puck at TD Place Stadium in Landsdowne Park at 4:05pm ET.