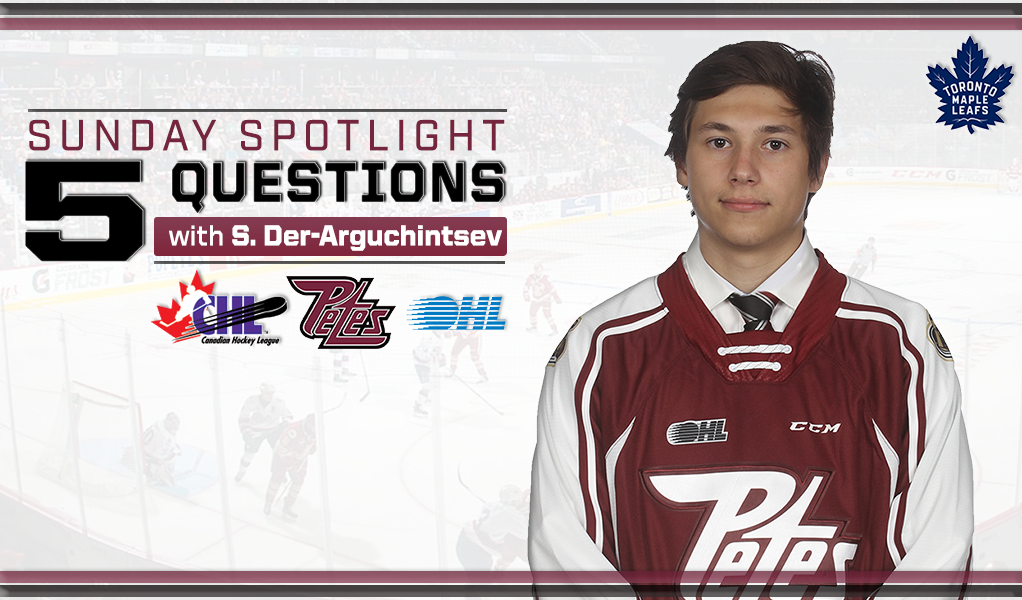 Semyon Der-Arguchintsev had a week to remember.

The Peterborough Petes forward and Toronto Maple Leafs draft pick led all Canadian Hockey League scorers after coming away with seven points – all assists – in the first two games of the 2019-20 campaign. A natural playmaker, Der-Arguchintsev returns to the Petes for his fourth season in 2019-20 where he will once again be one of the team’s main offensive drivers.

Der-Arguchintsev spoke with the Canadian Hockey League about his early success to begin the new season:

How did it feel to get off to such a great start in leading the CHL with seven points in two games?

It feels pretty nice to get some points and to have a good start. It was nice too that the team won its first game. I have good linemates and I feel confident this year.

With all seven of your points coming as assists, do you prefer the role of playmaker to goal scorer?

Obviously I am a playmaking centreman, so I am better off making plays and setting up my teammates. I can put the puck in the net too but obviously not as much as I can assist.

Is there a playmaker in the NHL who you model your game after?

There are a lot of good playmakers in the league but I wouldn’t say there is one I model my game after. I like Mitch Marner’s game. He’s like the same type of player as me so I try to watch him.

How cool was it to see your teammate Nick Robertson selected by the Toronto Maple Leafs and join you at camp?

It was really special for me. It was a dream for him. I thought he was going to go a little higher in the first round, but it didn’t happen. I think it’s a good thing that he’s with the Maple Leafs. It’s a great organization and it’s nice that both of us can keep playing together one day in the NHL.

What are your personal and team goals?

My team goals are high this year. I want to win this year. It’s possibly my last year in junior, so that’s the main goal, but also individual goals in that I have high, high expectations for myself.