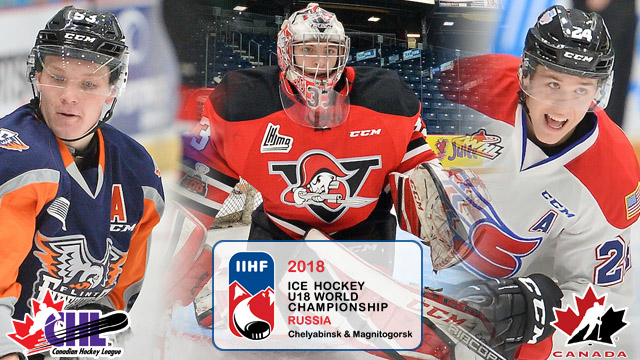 The 2018 IIHF World Under-18 Hockey Championship is getting underway in Chelyabinsk and Magnitogorsk, Russia and 21 CHL players will be representing Canada at the annual international showdown.

Canada is one of 10 teams in the tournament, competing in Pool A alongside the United States, Sweden, Switzerland and Belarus.

Pre-tournament action saw Canada defeat Slovakia 5-0 behind a pair of goals from Serron Noel (Oshawa Generals) on Sunday. They followed up that win with a 3-2 victory over Finland on Monday as Cam Hillis (Guelph Storm), Alexis Lafreniere (Rimouski Oceanic) and Ty Smith (Spokane Chiefs) found the back of the net.

Canada kicks off the tournament against its cross-border rival United States on Thursday at 9:30 a.m. ET. Canada will also play against Belarus, Switzerland, and Sweden during the preliminary round. TSN, the official broadcast partner of Hockey Canada, is broadcasting 15 games, including all of Team Canada’s match-ups at the IIHF U18 World Championship.

For more coverage of the event, visit hockeycanada.ca and IIHF.com.