2021 World Juniors will be played in Edmonton bubble 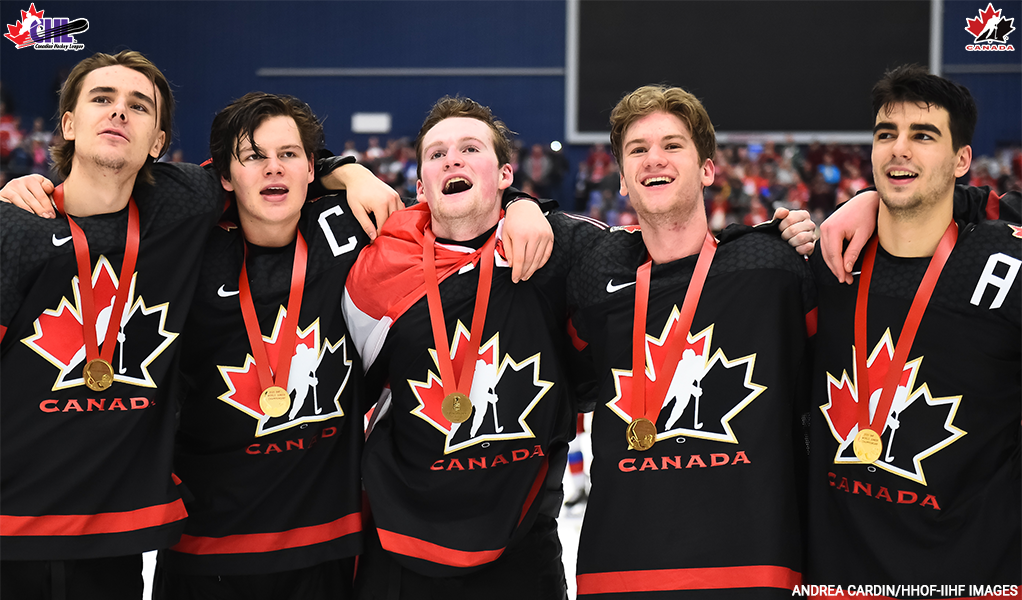 Canada’s National Junior Team will have the opportunity to defend gold on home ice this season.

The IIHF Council has approved a proposal from Hockey Canada to hold the 2021 IIHF World Junior Championship to a single-venue format without spectators at Rogers Place in Edmonton.

“The health and safety of players, officials, and fans is our top priority,” said René Fasel, IIHF President. “We were impressed with the presentation from the local organizing committee outlining how a potential “bubble” scenario would operate within Edmonton, and we are confident that we can follow the NHL’s great example in creating a safe environment for teams to compete.”

The move to a single venue in Edmonton will necessitate a review of the tournament schedule, which will be announced at a later date. The tournament will Group A teams like Canada, Finland, Switzerland, Slovakia, and Germany, while Group B consists of Russia, Sweden, the United States, the Czech Republic, and Austria.

“After careful consideration and monitoring of the COVID-19 pandemic, it has been determined the best course of action is to prepare to host the 2021 IIHF World Junior Championship in Edmonton without fans in attendance,” said Tom Renney, Hockey Canada Chief Executive Officer. “A tremendous amount of work has been put into the planning of the 2021 IIHF World Junior Championship, and we appreciate the IIHF’s consideration of our hosting proposal for the event. Hockey Canada believes it will be able to host a safe and successful event for all participants and the community at large this year by following strict safety protocols set forth by the appropriate health authorities. These are extraordinary times, and we understand the World Juniors will look different this year while being played in one venue with additional safety precautions. We have no doubt that passionate hockey fans everywhere will still be able to enjoy this annual holiday tradition through complete event coverage from our broadcast partners, TSN and RDS, and we look forward to hosting this prestigious event this December in Edmonton.”

In order to help mitigate the costs associated with organizing a competition bubble for the tournament, the IIHF Council together with Hockey Canada and the Swedish Ice Hockey Association have agreed that the 2022 IIHF World Junior Championship will be hosted in Edmonton and Red Deer, with the expectation that the 2022 World Juniors would be held with spectators in both venues.

“Hockey Canada wishes to extend its gratitude to the IIHF for its careful consideration of the status and hosting model of the 2021 IIHF World Junior Championship, as well as the Government of Alberta for its support and confidence in Hockey Canada’s plans for the 2021 World Juniors,” said Scott Smith, Hockey Canada President and Chief Operating Officer. “Although it is disappointing for passionate hockey fans to not be able to attend in person this year, we are thrilled to announce that the IIHF World Junior Championship will return to Edmonton and Red Deer in December 2021. Hockey Canada will continue to work with the Oilers Entertainment Group, the Red Deer Rebels, the cities of Edmonton and Red Deer, our broadcast partners and all event partners to prepare for a world-class experience for fans at the 2022 World Juniors.”

The World Juniors annually features talent from across the Canadian Hockey League including 49 players from 35 different teams that represented eight of the 10 competing countries at the 2020 event in Czech Republic. Team Canada was powered by 22 past and present CHL stars in their gold medal triumph over Russia led by MVP Alexis Lafreniere of the Rimouski Oceanic.

“Although the World Juniors will look and feel different for the athletes and staff that will be selected to represent Canada at the 2021 IIHF World Junior Championship, we are grateful to be able to compete on home ice as Canada’s National Junior Team prepares to defend the gold medal in Edmonton,” said Scott Salmond, Hockey Canada Senior Vice-President of National Teams. “We also look forward to returning to the cities of Edmonton and Red Deer in 2022, as we know both communities and all event partners will deliver a world-class experience to players, teams, fans and volunteers alike. As we prepare to compete in consecutive tournaments on home ice, Hockey Canada extends its appreciation to the Canadian Hockey League for its support of the National Junior Team and the IIHF World Junior Championship.”

The 2022 IIHF World Junior Championship was scheduled to be hosted in Gothenburg, Sweden. Under the new agreement, Sweden will host the 2024 World Juniors while Russia remains the host in 2023. Following the cancellation of the 2021 IIHF Ice Hockey U20 World Championship Division I Group A, the IIHF Council confirmed that there will not be any team relegated from the 2021 World Juniors.