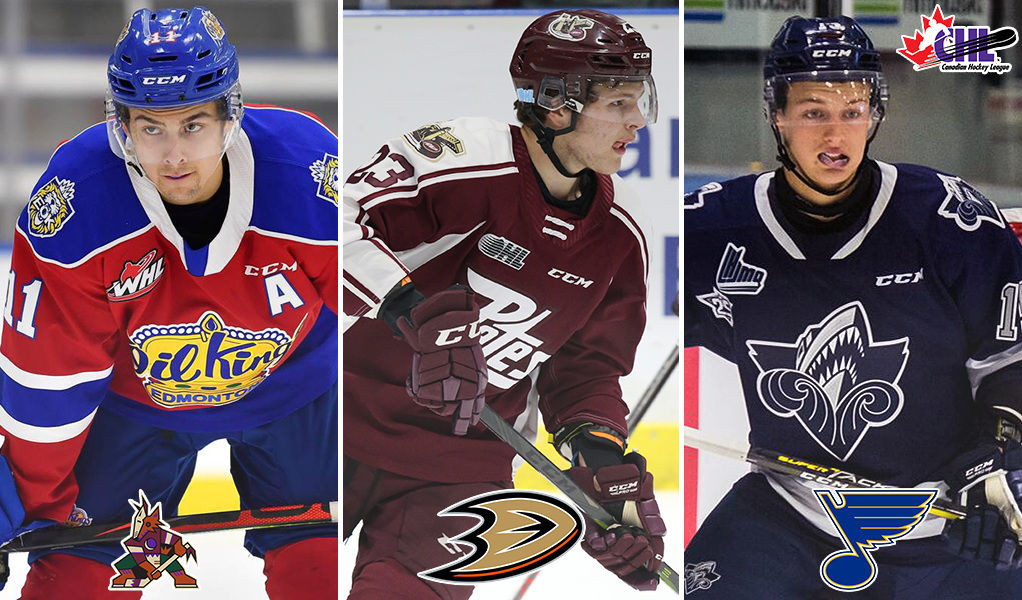 Signing season is underway in the National Hockey League.

After seeing 87 players from across the Canadian Hockey League selected in the 2021 NHL Draft – the league’s best showing in four years – a handful have already made the next step in inking their first professional contract at the NHL level:

The Nashville Predators got signing season started shortly following the conclusion of this year’s draft, coming to terms with newly minted first rounder and Halifax Mooseheads forward Zachary L’Heureux, who put pen to paper in late July. Following a successful rookie season with the Moncton Wildcats in which he neared point-per-game production, L’Heureux joined the Mooseheads last year where he continued his strong offensive showing as he finished second in team scoring with 39 points in only 33 games.

🎥 Zachary L'Heureux: “I’m a guy that can play a hard, gritty game but also has skill." pic.twitter.com/huzwivwSqp

The ensuing weeks then saw the Los Angeles Kings announce their signing of eighth-overall selection Brandt Clarke. After competing on loan in Slovakia this past season, the Barrie Colts blue-liner then put in a dominant performance at the 2021 IIHF U18 World Championship where he put up seven points in as many appearances to help Canada to a gold-medal finish and earn a spot on the tournament all-star squad.

In Manhattan, the New York Rangers also announced the signing of first-round pick Brennan Othmann, the Flint Firebirds forward who pieced together an impressive freshman campaign in 2019-20 that culminated with a spot on the OHL First All-Rookie Team before heading to Switzerland on loan the following season. The Pickering, Ont., native then joined his native Canada at the 2021 IIHF U18 World Championship where he provided solid secondary scoring support with six points in seven games.

The Anaheim Ducks then announced a pair of signings in Everett Silvertips blue-liner Olen Zellweger as well as Peterborough Petes power forward Mason McTavish. A solid puck-moving defender, Zellweger impressed in an abbreviated showing in the WHL in 2020-21, notching 13 points over 11 games with the Everett Silvertips. For McTavish, who put up 11 points through 13 games while competing on loan in Switzerland this past season, the budding centre then put together a top-tier performance at the 2021 IIHF U18 World Championship where he finished tied for second in team scoring en route to the gold.

The @AnaheimDucks have announced the signing of @WHLsilvertips defenceman Olen Zellweger to a three-year, entry-level contract.

Zellweger was a second round pick by Anaheim in the 2021 NHL Draft.

The @AnaheimDucks have signed Mason McTavish to a three-year, entry-level contract! ✍🏻

The Detroit Red Wings shored up between the pipes by coming to terms with Edmonton Oil Kings netminder Sebastian Cossa, who in hearing his name called at 15th overall in the 2021 class became the highest-selected CHL goaltender in 15 years. A modern keeper who brings plenty of size in the blue paint, Cossa was a force in the most recent season, coming away with the victory in 17 of his 19 appearances coupled with league-leading finishes in the goals-against average (1.57) and save percentage (.941) columns. Beyond Cossa, draft day also saw another Oil Kings talent called upon when the Arizona Coyotes selected right-wing Dylan Guenther at ninth overall. The 2019-20 WHL Rookie of the Year, Guenther’s freshman season saw him collect 26 goals and 33 assists over 58 games before following up that performance with 12 goals and 12 assists in just 12 games in 2020-21, marking the best point-per-game rate across the WHL.

The signings of first-round picks then continued in Columbus where the Blue Jackets came to a three-year agreement with Medicine Hat Tigers forward Cole Sillinger. Originally chosen in the opening round of the 2018 WHL Draft, Sillinger put together a solid first season with the Tigers in 2019-20 as he finished both fourth in team scoring and fourth-best among his fellow freshmen league-wide with 53 points in 48 games.

In New Jersey, the Devils also inked Sudbury Wolves forward Chase Stillman to an entry-level contract. The son of longtime NHLer Cory Stillman, the younger debuted with the Wolves in 2019-20 where he collected 34 points in 58 games before competing on loan in Denmark for the past season. The year also saw the product of Peterborough, Ont., join the Great White North at the 2021 IIHF U18 World Championship where he added another four points in seven games.

Congrats Chase Stillman!@Sudbury_Wolves forward and first round 2021 #NHLDraft pick has signed a three-year entry-level #NHL contract with the @NJDevils.

Elsewhere, it has been a whirlwind offseason for scoring forward Zachary Bolduc. After topping the Rimouski Oceanic in scoring with 29 points in 27 games, the Quebec native heard his name called by the St. Louis Blues on the opening day of the draft. The ensuing weeks then saw Bolduc shift to the Quebec Remparts before later landing his first professional contract with the Blues.

Rounding out the recent signings, the Minnesota Wild and Winnipeg ICE blue-liner Carson Lambos announced an agreement on an entry-level contract. Competing on loan in Finland last season before returning to Winnipeg where he was limited to a pair of appearances due to injury, the budding rearguard brings solid offensive pedigree as evidenced from his first season with Winnipeg in which he led all WHL rookie defencemen with 32 points in 57 games.

Welcome to the #StateOfHockey, Carson! ✍

The #mnwild has signed defenseman Carson Lambos to a three-year, entry-level contract.