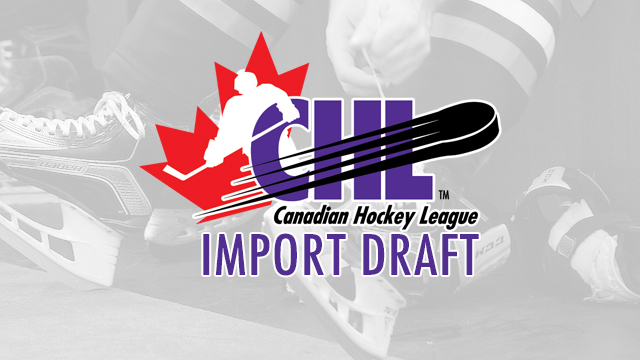 Toronto, ON – The Canadian Hockey League today announced the final results of the 2017 CHL Import Draft.

The 26th annual CHL Import Draft included a total of 72 players consisting of 50 forwards and 22 defencemen selected from 11 different countries featuring a draft-high 19 players from Russia.

The two-round draft took place online with the order of selection rotating through each of the CHL’s three leagues using an inverse order of final regular season standings within each league from the 2016-17 season.

The Barrie Colts used the first overall pick to acquire Russian forward Andrei Svechnikov, a 2018 NHL Draft prospect who recently earned bronze at the 2017 IIHF World Under-18 Championship.  His international hockey success this season also included a MVP performance at the World Junior A Challenge, and a bronze medal at the World Under-17 Hockey Challenge where he led the tournament in points.  The Moncton Wildcats used the second overall pick to select fellow Russian forward and 2018 NHL Draft prospect Alexander Khovanov who was an Under-17 teammate of Svechnikov capturing bronze in Sault Ste. Marie last November.  At third overall the Kootenay ICE selected Switzerland’s Gilian Kohler, a forward also eligible for the 2018 NHL Draft.

Each team in the CHL is permitted to dress and play a maximum of two import players each season who are selected annually through the CHL Import Draft.

A total of 15 players acquired through the CHL Import Draft were recently selected in the 2017 NHL Draft including New Jersey Devils first overall pick Nico Hischier of the Halifax Mooseheads. Other first round picks included Finnish defencemen Juuso Valimaki of the Tri-City Americans selected 16th overall by the Calgary Flames and Henri Jokiharju of the Portland Winterhawks selected 29th overall by the Chicago Blackhawks.

Last season a total of 79 players were selected from 11 different countries led by 24 players from Russia and consisting of 53 forwards and 26 defencemen.