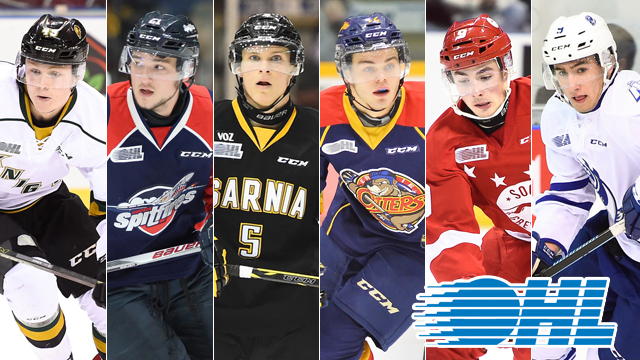 Providing the Mastercard Memorial Cup champion in each of the past two seasons, the Ontario Hockey League will boast a number of contenders for the Canadian Hockey League’s most prized possession in 2016-17.

The Mastercard Memorial Cup champion London Knights begin their title defence right away, opening up the OHL season in Sarnia on Wednesday before last year’s championship team will be recognized prior to puck drop in Friday’s home opener against Erie.

The last back-to-back Mastercard Memorial Cup champion was the Windsor Spitfires in 2009 and 2010, and with the event coming to Windsor next May, the Knights have set their sights on becoming the latest club to do so.

Just down the 401, the rival Windsor Spitfires have built up their forces for one of the most anticipated seasons in franchise history.

Big Ottawa Senators first round selection Logan Brown leads the attack while last season’s leading scorer Christian Fischer, who is currently at camp with the Arizona Coyotes and could wind up in the American Hockey League, will be a go-to guy should he return.

As always, the OHL’s Western Conference is a gauntlet of tough teams, with renowned blueliner Jakob Chychrun (Arizona) and the Sarnia Sting waiting on the fate of stars Pavel Zacha (New Jersey) and Travis Konecny (Philadelphia) at NHL camps and the Soo Greyhounds returning a wealth of talent up front in forwards Zach Senyshyn (Boston), captain Blake Speers (New Jersey) and Boris Katchouk (Tampa Bay).

The 2016 Hamilton Spectator Trophy recipient Erie Otters will be an interesting group to keep an eye on as well. Long-time captain and franchise cornerstone Dylan Strome is putting his best foot forward to earn a spot with the Arizona Coyotes while back-to-back 50-goal man Alex DeBrincat (Chicago) will be tasked with leading the offence in the meantime. The Otters lose some names up front to graduation and the blue line is an unheralded group, but the potential return of Los Angeles Kings prospect Erik Cernak could provide them with a real boost.

The Mississauga Steelheads appear to be the early season team to beat in the Eastern Conference as New Jersey Devils prospects Michael McLeod and Nathan Bastian spearhead an attack that also includes 2017 NHL Draft prospects Owen Tippett and Ryan McLeod. The Mississauga blue line is loaded with NHL prospects in Sean Day (NY Rangers), Jacob Moverare (Los Angeles), Austin Osmanski (Buffalo) and Vili Saarijarvi (Detroit), who will miss the first half of the season to injury. The addition of overage goaltender Matthew Mancina bolsters the trout in the crease as they look to be a well-built team.

The Oshawa Generals and Hamilton Bulldogs both feature considerable depth throughout the lineup and could challenge the Steelheads in the Eastern Conference.

The Kingston Frontenacs remain somewhat of a wildcard as Los Angeles Kings prospect Spencer Watson recovers from offseason surgery and is slated to return in mid-December. Power forward and Arizona Coyotes prospect Lawson Crouse will look to crack the NHL lineup but could return along with Carolina Hurricanes third round pick Warren Foegele and Toronto Maple Leafs prospect Stephen Desrocher.

While some teams appear to be front line contenders, there are a number of question marks across the OHL with regard to who will be back and who won’t? The answers should arrive in the coming weeks and provide some added clarity to the league’s competitive landscape.

The North Bay Battalion and the Hamilton Bulldogs will host the CHL Canada Russia Series this November. Game three of the series will be at the North Bay Memorial Gardens on Thursday November 10th. Game four goes Monday November 14th at FirstOntario Centre in Hamilton.

The Mastercard Memorial Cup returns to Ontario as the Windsor Spitfires will be one of the four teams competing for the Canadian Hockey League title that begins on May 18th at the WFCU Centre.

The quest to be crowned the 99th MasterCard Memorial Cup champion begins tonight in Sarnia and Flint as the 2016-17 season gets underway!