Toronto, ON – The Canadian Hockey League in association with the three regional leagues, the Halifax Mooseheads Hockey Club, and Home Hardware Stores Limited, today announced the 40 CHL players that will compete in the 2013 Home Hardware CHL/NHL Top Prospects Game at the Halifax Metro Centre on January 16, 2013.

27 of the CHL’s 60 member clubs are represented in this game featuring three players on the host Mooseheads including Team Cherry captain Nathan MacKinnon alongside Jonathan Drouin, and goaltender Zachary Fucale.  Team Orr captain Seth Jones of the Portland Winterhawks will also be joined by a pair of teammates including forwards Oliver Bjorkstrand and Nicolas Petan.  The London Knights and Quebec Remparts also have a trio of players competing on Team Orr with forwards Max Domi, Bo Horvat, and defenceman Nikita Zadorov representing the Knights, while forwards Anthony Duclair, Adam Erne, and Nick Sorensen represent the Remparts.  The Rimouski Oceanic also have three players in the game with defenceman Samuel Morin and forward Frederik Gauthier playing for Team Cherry, and defenceman Jan Kostalek playing for Team Orr.

“Home Hardware congratulates the 40 players selected for the 2013 Home Hardware CHL/NHL Top Prospects Game,” said Paul Straus, President and CEO of Home Hardware Stores Limited.  “This year marks the 18th annual showcase of the CHL’s top-40 NHL draft eligible players and it continues to be an event that Home Hardware is proud to support. These young players represent communities across the country, and like Home Hardware, they and the sport of hockey are truly a part of the fabric of Canada. On behalf of the Dealer-Owners of close to 1,100 Home Hardware stores in communities across Canada, I would like to wish this year’s  players the very best of luck.”

Last season’s game in Kelowna, BC, featured 10 players that were selected in the first round of the 2012 NHL Draft including Ryan Murray of the Everett Silvertips who was selected second overall by the Columbus Blue Jackets.  Since the event was first introduced in 1996 the game has featured 10 players that were selected with the first overall pick in the NHL Draft including Chris Phillips, Joe Thornton, Vincent Lecavalier, Rick Nash, Marc-Andre Fleury, Patrick Kane, Steven Stamkos, John Tavares, Taylor Hall, and Ryan Nugent-Hopkins.

The 2013 Home Hardware CHL/NHL Top Prospects Game is proudly supported by title partner Home Hardware for the 14th straight year, along with associate sponsors Bank of Montreal, Subway, Old Dutch, and Post.  The game will be broadcast live to a national audience on Sportsnet and TVA Sports beginning at 8:00 pm Atlantic.

Tickets are still available and can be purchased through Ticket Atlantic or by calling 902-451-1221.

For more information about the event please visit www.homehardwaretopprospects.ca. 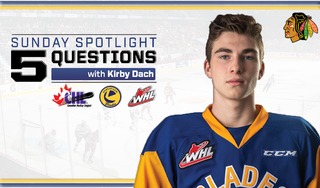