15 CHL Players Selected in First Round of 2016 NHL Draft 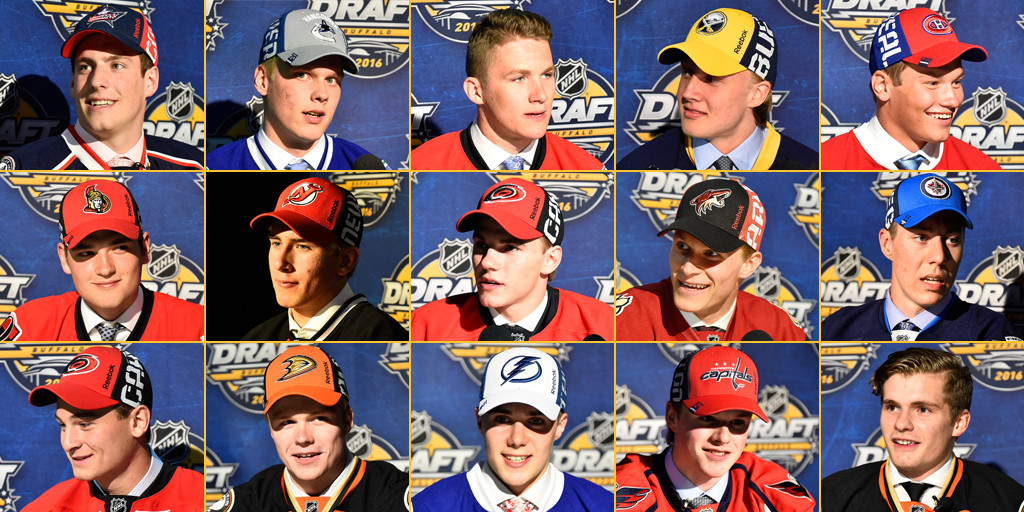 Buffalo, NY – The Canadian Hockey League today announced that 15 CHL players were selected in the first round of the 2016 NHL Draft held Friday night at First Niagara Center, home of the NHL’s Buffalo Sabres.

The 15 CHL players represents 50% of all players selected in the draft’s opening round including five players chosen in the top-10 led by forward Pierre-Luc Dubois of the Cape Breton Screaming Eagles picked third overall by the Columbus Blue Jackets.

“Speechless right now. I mean, I was a little surprised, but it’s probably my best birthday I’ve ever had in my life, so I’m pretty happy right now,” said the newly turned 18-year-old from Ste-Agathe-des-Monts who earned CHL Top Prospect of the Year honours this season. “Representing the QMJHL like this is an honour, and being the last guy since Sidney Crosby to be ranked first in North America is pretty huge. I was really grateful that they (Cape Breton) drafted me, and this year I kept going up in the rankings. My play got better and better as the season went on and I owe a lot to my coaches and my teammates.”

Dubois was one of two first round picks from the Quebec Major Junior Hockey League along with Julien Gauthier of the Val-d’Or Foreurs chosen 21st overall by the Carolina Hurricanes.

The Ontario Hockey League led the way with nine players selected in the first round of the NHL Draft including four players in the top-10 with defenceman Olli Juolevi of the London Knights chosen fifth overall by the Vancouver Canucks.

“It’s awesome to go to Vancouver. I saw how great the city is and how much they love hockey, it’s awesome,” said Juolevi, just the 23rd player to win World Junior gold and a MasterCard Memorial Cup title in the same season. “I think it shows my confidence in those things both in Finland and London we are playing all the way at the end. It’s great, and you can see that you can win with me. I’m so thankful for Dale (Hunter) and how much he helped me. That was one of the things when I came to London, I knew it’s a great team, but I knew he was one of the best coaches in the world.”

Following Juolevi at sixth overall was fellow Knight and MasterCard Memorial Cup overtime hero Matthew Tkachuk chosen by the Calgary Flames, with CHL Rookie of the Year Alexander Nylander of the Mississauga Steelheads going eighth to the Buffalo Sabres, and OHL Defenceman of the Year Mikhail Sergachev of the Windsor Spitfires picked ninth by the Montreal Canadiens to round out the league’s top-10 representation.  Forwards Logan Brown of the Spitfires (11th to Ottawa), and Michael McLeod (12th to New Jersey), along with defencemen Jakob Chychrun of the Sarnia Sting (16th to Arizona), Logan Stanley of the Spitfires (18th to Winnipeg), and forward Max Jones (24th to Anaheim) were also first round picks from the OHL.

The Western Hockey League featured four players selected in the first round led by defenceman Jake Bean of the Calgary Hitmen chosen 13th overall by the Carolina Hurricanes.

“It’s pretty special, I’m really grateful for the opportunity and it’s a really cool day for me and my family,” said Bean, a Calgary native, playing in his second season for his hometown Hitmen. “There are a lot of really good players in the west and to be the first one is pretty cool. I’ve been really fortunate to be surrounded by a first class organization, all the way from the front office to the coaches, the trainers, to the players, I can’t thank Calgary enough for what they’ve done for me and for what they’re going to do for me in the future.”

Bean was followed by forward Brett Howden of the Moose Jaw Warriors (27th to Tampa Bay), defenceman Lucas Johansen of the Kelowna Rockets (28th to Washington), and forward Sam Steel of the Regina Pats (30th to Anaheim) to complete all first round picks from the west.

Howden and Johansen continued a trend of CHL players following in the footsteps of older brothers chosen in the first round of their respective NHL Drafts.  Quinton Howden, who also played his WHL career in Moose Jaw, was the 25th overall pick of the Florida Panthers in 2010, while former Portland Winterhawk Ryan Johansen went fourth overall in 2010 to Columbus.  A third pair of drafted brothers this season included the Nylander’s with Alex following older brother William also chosen eighth overall when he was picked by Toronto in 2014.  Tkachuk followed in the footsteps of father Keith who was a first round pick of Winnipeg in 1990 becoming just the eighth first round father/son duo in NHL Draft history.

This season marked the first time in modern draft history where two CHL clubs (Windsor and London) each had three players chosen in the first round.  The 2013 Knights, 2011 Saint John Sea Dogs, and 2004 Calgary Hitmen are the only other CHL clubs to produce three first round picks in a single season since the draft format included 30 picks per round.  The 2016 first round marked the most successful in the history of the Steelheads with two players selected, while the Sting extended their first round NHL Draft streak to three years.

CHL Players Selected in the First Round of the 2016 NHL Draft:

For more information on the 2016 NHL Draft including full results visit www.nhl.com.