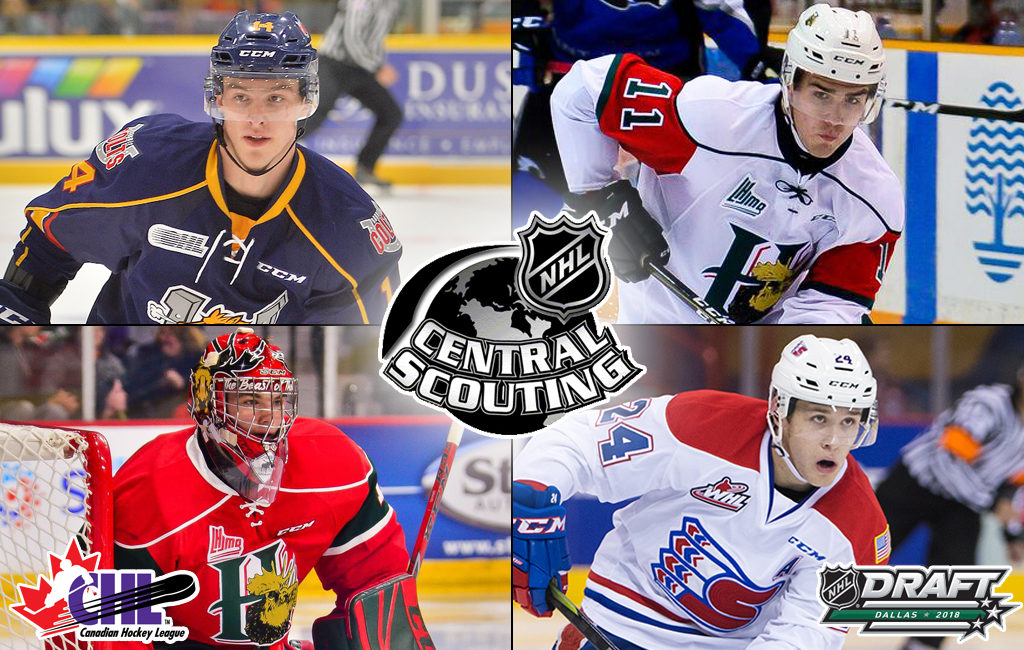 CHL forwards Andrei Svechnikov of the Barrie Colts and Filip Zadina of the Halifax Mooseheads occupy the top two spots on the list of North American skaters, leading a group of 19 CHL players ranked as first round candidates.

A total of nine CHL defencemen are ranked inside the top-31 including the aforementioned Bouchard and Dobson along with 12th ranked Jared McIsaac of the Halifax Mooseheads, 15th ranked Rasmus Sandin of the Sault Ste. Marie Greyhounds, 20th ranked Jett Woo of the Moose Jaw Warriors, 21st ranked Ryan Merkley of the Guelph Storm, 26th ranked Alexander Alexeyev of the Red Deer Rebels and 30th ranked Kevin Bahl of the Ottawa 67’s.

In the crease, each of the top four North American goaltenders are slated to compete in the upcoming 2018 Sherwin-Williams CHL/NHL Top Prospects Game as top-ranked Alexis Gravel of the Halifax Mooseheads teams up with fourth-ranked Kevin Mandolese of the Cape Breton Screaming Eagles on Team Orr. Team Cherry goaltenders include second-ranked Olivier Rodrigue of the Drummondville Voltigeurs and third-ranked Jacob Ingham of the Mississauga Steelheads.

The Ottawa 67’s lead all teams with six players included in the rankings while the Drummondville Voltigeurs, London Knights and Oshawa Generals trail close behind with five each. Teams with four ranked players include the Calgary Hitmen, Kitchener Rangers, North Bay Battalion, Red Deer Rebels, Saginaw Spirit and Vancouver Giants.

All 40 of the CHL players competing in the 2018 Sherwin-Williams CHL/NHL Top Prospects Game on Thursday January 25 in Guelph, Ont. appear in the Midterm Rankings including 25 of the top 62 skaters and each of the top-four ranked netminders.

Last season, 153 CHL players appeared in the Midterm Rankings before 89 were selected at the 2017 NHL Draft in Chicago  including 14 players chosen in the first round.