14 CHL Players Selected in First Round of 2017 NHL Draft 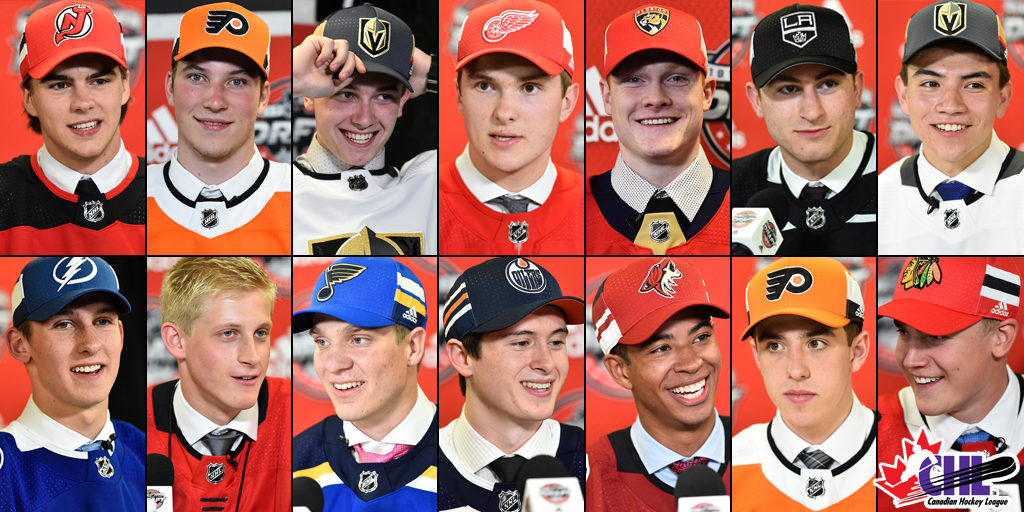 Chicago, IL – The Canadian Hockey League today announced that 14 CHL players were selected in the first round of the 2017 NHL Draft held Friday night at the United Center, home of the NHL’s Chicago Blackhawks.

The 14 CHL players represents 45% of all players selected in the draft’s opening round led by forward Nico Hischier of the Halifax Mooseheads chosen first overall by the New Jersey Devils. He was followed by second overall pick Nolan Patrick of the Brandon Wheat Kings who was selected by the Philadelphia Flyers.

Hischier’s selection marks the ninth time in the past 10 years that the Canadian Hockey League has produced the first overall pick of the NHL Draft. Hischier and Patrick are the latest 1, 2 combination from the CHL, following Aaron Ekblad (Florida Panthers/Barrie Colts) and Sam Reinhart (Buffalo Sabres/Kootenay Ice) in 2014.

“It feels unbelievable,” said Hischier, who becomes the first Swiss player to ever be taken first overall in the NHL Draft. “I was speechless there for a long time and I still can’t believe it. I hugged my mom first and I think she was crying a little bit so it was a lot of emotion. There are no words to describe this feeling.

“I didn’t know anything so it was from one second to the other.”

“I didn’t know where I was going to go, but I had a feeling I might end up in Philly and that’s a place that I’d be really excited to play. I try not to think too far ahead and I just want to enjoy the moment and take in the experience of being here.

Hischier was one of two first round picks from the Quebec Major Junior Hockey League along with defenceman Pierre-Olivier Joseph who became the highest selected player in Charlottetown Islanders history chosen 23rd overall by the Arizona Coyotes.

The Western Hockey League led the way with seven players selected in the first round of the NHL Draft which is the league’s highest total since 2014.  Three of their seven picks were top-10 selections including Patrick, followed by Portland Winterhawks forward Cody Glass who became the first ever draft selection in Vegas Golden Knights history going to the expansion franchise at sixth overall.  Following Glass,  Tri-City Americans centreman Michael Rasmussen was chosen ninth by the Detroit Red Wings.

With the selections of Rasmussen and Valimaki, the Tri-City Americans had two players chosen in the first round of the NHL Draft for the first time since 1996, marking the fourth time in franchise history that they’ve produced two or more first round selections.

The selections of Glass and Jokiharju give the Portland Winterhawks two first round NHL Draft selections for the first time since 2011 when Sven Baertschi (13th overall, Calgary) and Joe Morrow (23rd overall, Pittsburgh) were chosen.

The selection of Thomas marks the third straight year a London Knight has been chosen in the draft’s opening round representing the CHL’s longest active streak.  In 2016 the club produced three first round selections in Olli Juolevi (5th overall, Vancouver), Matthew Tkachuk (6th overall, Calgary), and Max Jones (24th, Anaheim), while Mitch Marner (4th, Toronto) was selected in 2015.

CHL Players Selected in the First Round of the 2017 NHL Draft:

(Click on a name below to watch post-draft interview)

For more information on the 2017 NHL Draft including full results visit www.nhl.com.