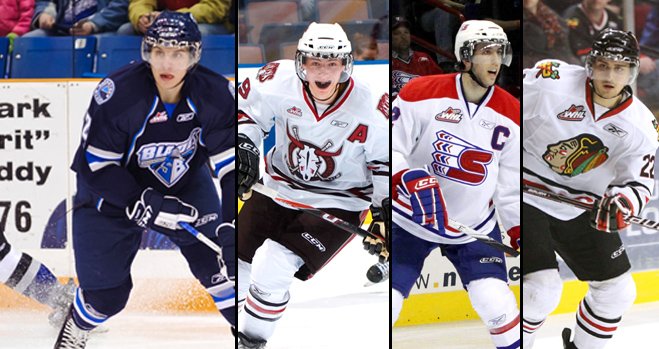 CALGARY, AB — The quest for Western Hockey League supremacy and a chance to compete in the 2011 MasterCard Memorial Cup in Mississauga, ON, begins as the second round of the 2011 WHL Playoffs kick off on Thursday, April 7, 2011.

The Saskatoon Blades prevailed in a hard-fought six-game series versus the Prince Albert Raiders in the first round of the 2011 playoffs.  Can Brayden Schenn’s Blades keep their terrific season going?  The Ice froze out the Moose Jaw Warriors in their opening-round series, winning the final game at the Crushed Can in Moose Jaw.  Do they have what it takes to knock off the Scotty Munro Memorial trophy winners?  The Red Deer Rebels smothered the Edmonton Oil Kings in a four-game sweep in the Husky WHL Eastern Conference quarter-final.  Now, the Rebels face a Medicine Hat Tigers team outgunned the Wheat Kings in the opening round.  Can the Rebels outlast a Tigers team that had their number throughout the regular season, or will the Tigers continue their domination of the Central Division champs?

The Portland Winterhawks swept aside the Everett Silvertips in the first round of the playoff, but will now have their work cut out for them in a second-round series versus the B.C. Division champion Kelowna Rockets, who swept Prince George in the opening round.  Can the Winterhawks’ star-studded lineup take them through to the final four, or will the Rockets take flight and make their way to the Western Conference final for a second time in three years?  The Spokane Chiefs face their archrivals the Tri-City Americans in what should be a fierce battle in the second round of the playoffs.  Can Jared Cowen lead his Chiefs to another series win over their bitter rivals?  Or, will Brendan Shinnimin lead his Americans to a second straight appearance in the Western Conference final?

The Saskatoon Blades and Kootenay Ice are set to meet up in the WHL playoffs for the first time.

The Blades advanced to the second round of the 2011 playoffs after eliminating a plucky Prince Albert Raiders team in six games in the opening round.  Nobody can question the offensive power of the Blades, particularly on home-ice where they fired home 21 goals in three games versus the Raiders.  Led by Brayden Schenn and Curtis Hamilton, the Blades also saw their power play click at a solid 25% clip in the first round.  They will need their power play to stay strong versus a Kootenay team that boasts excellent penalty killing.  The Blades’ defense was, at times, exposed by the Raiders’ attack in the first round, particularly in Games 3 and 4 on the road.  Stefan Elliott and the Blades’ defense corps will have to tighten up to slow down Kootenay’s scorers like Cody Eakin and Max Reinhart.  Fortunately, the Blades were successful in shutting down Kootenay’s offense during the regular season, allowing just eight goals in four games.  Steven Stanford carried his terrific regular-season form into the playoffs, allowing just 13 goals on 220 shots in six games versus the Raiders.

The Ice are making their first appearance in the second round of the playoffs since the 2007-08 season after defeating the Moose Jaw Warriors in six games in the first round.  The Ice scored 18 goals through six games versus the Warriors in the opening round, but only got goals from seven different players.  Matt Fraser and Joe Antilla combined for nine of the team’s 18 tallies.  More scoring will need to come from secondary sources if the Ice are to keep pace with the high-octane Blades.  Defensively, the Ice were solid versus the Warriors, allowing only 15 goals over six games.  Much of their defensive success came from their excellent penalty killing unit which killed off 30 of 34 Moose Jaw power plays.  Brayden McNabb has been strong at both ends of the Ice for Kootenay, averaging a point per game while posting a +8 rating.  More offense from the defense corps would help the Ice’s chances versus the Blades.  Nathan Lieuwen backstopped the Ice past the Warriors in the first round.  Yet, versus the Blades, he will likely face much more than the 23.5 average shots per game he faced in the first round.

The Red Deer Rebels and Medicine Hat Tigers meet up for a playoff series for the first time since the 2006-07 season.  Kris Russell and the Tigers defeated Martin Hanzal and the Rebels in seven games in the first round of the 2007 WHL playoffs en route to winning the 2007 WHL Championship.

The Rebels are making their first appearance in the second round of the WHL playoffs since the 2003-04 season after sweeping aside the Edmonton Oil Kings in the first round of the 2011 post-season.  The Rebels dominated the Oil Kings with their air-tight defense and goaltending, and solid offensive production from their top guns Ryan Nugent-Hopkins, Andrej Kudrna and Brett Ferguson.  Nugent-Hopkins will have to find a way to generate offense versus a Tigers team that held the Rebels to two or fewer goals in five of six regular-season encounters.  Alex Petrovic and the Rebels’ defense corps were as solid as usual versus Edmonton, allowing just six goals while killing off all 16 power plays they faced in four games versus Edmonton.  The Tigers, though, were one of few teams to solve the Rebels’ defense and goaltender Darcy Kuemper, scoring 20 times in six regular-season clashes.  Petrovic and Co. will need to pay attention to Tigers’ stars Linden Vey and Emerson Etem, who had success versus Red Deer this season.  As great as Kuemper’s regular-season performance was, he had difficulties versus Medicine Hat, posting just one win and a .893 save percentage in six games.

The Tigers advanced to the second round of the WHL playoffs for an eighth time in the last nine seasons after eliminating the Brandon Wheat Kings in six games in the Husky WHL Eastern Conference quarter-finals.  2010-11 WHL scoring champ Linden Vey may have started slow versus Brandon, but caught fire with three goals and 10 points over the final three games as the Tigers closed out the series with three wins.  Vey and Etem will need to keep up their dominant offensive play versus a very tough Rebels’ defense.  Defensively, the Tigers were exposed by Brandon’s high-octane offense in the first round, allowing 29 goals in six games.  Tightening up their power play, which allowed 11 goals versus Brandon, will be important if the Tigers want to shut down the Rebels’ several talented scorers.  The Tigers were dealt a blow when starting netminder Tyler Bunz went down with an injury in the first game versus Brandon.  However, Deven Dubyk performed adequately to backstop the Tigers to the series win.  Both Bunz and Dubyk were excellent versus the Rebels this season, with Dubyk posting a 1.00 GAA and a .971 save percentage in two starts.  The Tigers won all three visits to Red Deer this season, which bodes well since they will need at least one win in Red Deer to take the series.

The Portland Winterhawks and Kelowna Rockets meet up in the post-season for the first time since the 1993-94 season, when the Rockets were based in Tacoma, WA.  Lonnie Bohonos and the Winterhawks beat John Varga and the Rockets 4-0 in the opening round of the 1994 playoffs.

The Winterhawks swept aside the Everett Silvertips in four games in the first round to advance to the Kal Tire WHL Western Conference semi-finals for a second straight season.  Led by Nino Niederreiter’s 10 points, the Hawks’ potent offense outscored the Silvertips 22-8 through the four games of the series.  Niederreiter was one of eight Winterhawks’ players to average at least a point per game in the first round.  Yet, the Hawks’ attack will face a tough test to get past the Rockets’ defense and the goaltending of Adam Brown.  Defensively, the Winterhawks allowed only eight goals in four games versus Everett, with three of those goals coming on Everett power play chances.  Joe Morrow and the Hawks’ defense corps will have to find a way to shut down a more powerful Rockets’ attack, particularly the red-hot Shane McColgan.  Goaltender Mac Carruth was strong in the first round, posting a .944 save percentage and four wins.  The 19-year-old faced an average of 35.5 shots per game in four games versus the ‘Tips.  Carruth had success versus the Rockets this season, posting a 3-1 record with a 2.00 GAA and a solid .938 save percentage in their four meetings.

The Rockets are in the second round of the WHL playoffs for a third straight season after having swept the Prince George Cougars in their Kal Tire WHL Western Conference quarter-final series.  Led by Shane McColgan’s 10 points, the Rockets’ offense outscored the Cougars 22-13 in the opening round of the playoffs.  In addition, the Rockets’ power play clicked at a 28.6% clip through their four games versus the Cougars.  The Rockets will need to keep putting pressure on a Portland defense that gave up an average of over 35 shots per game in the first round.  Defensively, the Rockets endured some lapses versus Prince George, allowing a combined 10 goals in Games 2 and 3 of the series.  Tyson Barrie and the Rockets’ defense corps will need to be at their best to shut down Portland’s deep group of forwards.  Adam Brown has been one of the Western Conference’s best netminders this season.  Although not as sharp as he would have liked to be versus Prince George, he still managed to find a way to earn wins for the Rockets.  The Rockets may have lost the first three meetings versus Portland this season, but they won the most recent encounter – the only post-Halloween meeting between the teams.

The Spokane Chiefs and Tri-City Americans meet up in the WHL playoffs for the first time since the 2007-08 season.  Drayson Bowman and the Chiefs defeated Taylor Procyshen and the Americans 4-3 in a thrilling seven-game 2008 Kal Tire WHL Western Conference Championship series en route to winning the 2008 WHL Championship and Memorial Cup.

The Chiefs are in the second round of the WHL playoffs for a third time in the last four seasons after defeating the Chilliwack Bruins 4-1 in the opening round.  A balanced attack was the story for the Chiefs during the regular season, and again through the first round of the post-season, with 13 different players scoring in the five-game series versus the Bruins.  The Chiefs managed to win the final two games of the series without leading scorer Tyler Johnson, who was injured in Game 3.  Should Johnson be ready for the start of the series, he should help the Chiefs’ power play, which converted just three of 22 chances in the opening round.  Defensively, the Chiefs were strong versus a talented Bruins team while successfully stifling the Bruins’ lethal power play.  Jared Cowen and Co. will have to be even better versus a highly skilled Ams offense.  Goaltender James Reid will need to stay sharp to shut the door on Tri-Cities’ League-leading power play.

The Americans are making their fourth straight appearance in the second round of the WHL playoffs, having eliminated the Vancouver Giants in a four-game sweep in the opening round.  After two close games to open the series, the Ams asserted themselves versus Vancouver, outscoring the Giants 9-1 over the final two games of the series.  Offensively, the Ams boast just as much depth as the Chiefs, with several offensive weapons who can do damage in the attack zone.  The Ams will need to keep their power play firing on all cylinders if they are to break down a Chiefs’ penalty killing unit that ranked first in the WHL all season.  Defensively, the Ams found a way to shut down Vancouver’s star forwards in the opening round.  Tyler Schmidt, Matt MacKenzie and the rest of the blue line corps will have to do a better job shutting down Chiefs’ veteran Tyler Johnson, who scored 11 times in 11 games versus the Ams in the regular season.  Netminder Drew Owsley continues to show he’s a playoff performer for the Ams, having allowed only six goals in four games in the first-round series versus Vancouver.